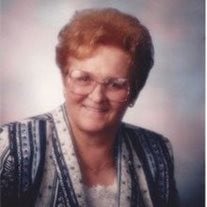 ADELINE O'LINDA AXT-GOCHENOUR 1934 - 2016 Adeline O'Linda (Gillig) Axt-Gochenour age 82 of Plattsmouth, NE passed away on Wednesday, December 7, 2016 at Plattsmouth Care and Rehab in Plattsmouth. She was born on August 3, 1934 to Walter and Mary Magdeline (Meckle) Gillig in Denhoff, ND. She was raised and schooled in Denhoff and she graduated from Denhoff High School in 1952. After graduating from high school, she taught country school. Adeline met Marvin Lawrence Axt and they were later married in McClusky, ND while Marvin was serving in the U.S. Marine Corps. Adeline and Marvin moved to Lincoln, NE while Marvin attended college. Then they made their home in O'Neil, NE until June of 1968 when they moved to Plattsmouth. Adeline was a wife, stay at home mom, and homemaker. After her children were raised, she worked as the Librarian at the Plattsmouth High School and Plattsmouth Elementary School. Then Adeline worked at Lincoln Telephone and Telegraph until she retired. After Marvin passed away, she later married Harry Isaac Gochenour in Plattsmouth. She was a member of First Lutheran Church and the Fraternal Order of Eagles Aerie #365 Auxiliary both of Plattsmouth. Adeline is survived by her son: Randy Axt and wife Cheryl of Plattsmouth, NE; granddaughter: Katie Ross and husband Danny of Virginia Beach, VA; two great grandchildren: Lucas and Livianna; one sister: LaVella West and husband Richard of Lincoln, NE; and many beloved nieces, nephews, cousins, and friends. She was preceded in death by her parents: Walter and Mary Gillig, two husbands: Marvin Axt and Harry Gochenour, son: Darrell Axt, daughter: Candice Axt, and her sister: Frieda Hoffer. Visitations will be held from 4:00 to 8:00 P.M., with family greeting relatives and friends from 6:00 to 8:00 P.M., on Friday, December 9, 2016 at Roby Funeral Home in Plattsmouth. A Memorial Service will be held at 11:00 A.M., Saturday, December 10, 2016 at First Lutheran Church in Plattsmouth with Pastor Lloyd Stuhr officiating, Ricki Duffy as vocalist, and Marsha Fleming as organist. Her Final Resting Place will be at Oak Hill Cemetery in Plattsmouth. Inurnment of her cremains will be at a later date. The family suggests Memorials to the JDRF Diabetes Foundation.

ADELINE O'LINDA AXT-GOCHENOUR 1934 - 2016 Adeline O'Linda (Gillig) Axt-Gochenour age 82 of Plattsmouth, NE passed away on Wednesday, December 7, 2016 at Plattsmouth Care and Rehab in Plattsmouth. She was born on August 3, 1934 to Walter and... View Obituary & Service Information

The family of Adeline O'Linda Axt-Gochenour created this Life Tributes page to make it easy to share your memories.

Send flowers to the Axt-Gochenour family.