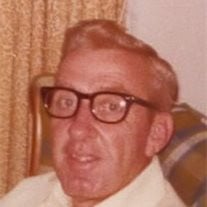 ALFRED HENRY SOUTHERLAND 1930 - 2014 Alfred Henry Southerland age 83 of Plattsmouth, Nebraska passed away on Tuesday, March 25, 2014 at the Bellevue Medical Center. Alfred was born on December 23, 1930 to William Alfred and Pearl Lee (Sandlin) Southerland in Muldrow, Sequoyah County, Oklahoma. He was raised and schooled in Gans, OK and graduated from Gans High School with the class of 1949. After graduating from high school, Alfred enlisted in the U.S. Army and served his country during the Korean Conflict from July of 1949 to July of 1952. After serving in the U.S. Army, Alfred enlisted in the U.S. Air Force and served his country during the Korean Conflict and the Vietnam War from February of 1953 until February of 1967. Alfred met the love of his life Bridget Corbett and they were later married on March 9, 1962 in Plattsmouth, NE. In 1969, Alfred and Bridget made their home in Plattsmouth and have been here since. After retiring from the Air Force, Alfred worked as a Mail Carrier for the US Postal Service in Bellevue, NE until he retired in 1989. He was a member of Lepert Wolever V.F.W. Post #2543 and the Fraternal Order of Eagles Aerie #365 both of Plattsmouth, NE. Alfred is survived by his wife: Bridget Southerland of Plattsmouth, NE, son: John W. Southerland of Williamsport, PA, daughter: Anne M. Southerland and dear friend Sue Bosley of La Vista, NE, sister: Juanita "Peggy" Jones of Selma, CA, brother: Charles Southerland and wife Joyce of Booneville, AR, and numerous nieces, nephews, cousins, and many friends. He is preceded in death by his parents: Albert and Pearl Southerland, three bothers: William Albert Southerland Jr., William "Jiggs" Southerland, and Jack Southerland, and two sisters: Nadine Harvell and Hazel Allen. A Funeral Service will be held at 11:00 A.M., Saturday, March 29, 2014 at Roby Funeral Home in Plattsmouth, NE with Pastor Kurt Stecker officiating. Visitations will be held from 1:00 – 9:00 P.M., Friday, March 28, 2014 with family greeting relatives and friends from 6:00 – 8:00 P.M. at Roby Funeral Home. Interment will be at Oak Hill Cemetery in Plattsmouth, NE.

The family of Alfred Henry Southerland created this Life Tributes page to make it easy to share your memories.

Send flowers to the Southerland family.