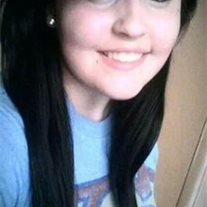 ALYSSA ANN JOHNSON 1998 - 2014 Alyssa Ann Johnson Age 15 of Plattsmouth, NE passed away peacefully in the loving arms of her mother on Sunday, January 26, 2014 at Texas Children's Hospital in Huston, TX. She was born on March 29, 1998 to Christina Marie (Johnson) Blackburn in Omaha, NE. Alyssa was raised and schooled in Plattsmouth, NE. Alyssa loved with her whole heart; she was kind, generous, empathetic, and honest: even if you didn't want to hear what she had to say. She was very passionate and stood her ground on everything she believed in. She was amazingly creative; she painted, sketched, and wrote poetry and songs. She loved writing notes to her mom and friends. She was a sophomore at Plattsmouth High School and didn't know yet what she wanted to major in at college, but she did know she wanted to attend the University of Nebraska at Lincoln after only one trip there. Alyssa is survived by her mother: Christina Blackburn, father: Jeff Blackburn, brother: Brandon Coop, sister: Kaitlynn Coop, step-sister: Jennifer Blackburn, dad: Brian Coop, maternal grandparents: Marcia Hankins and Richard Johnson, paternal grandparents: Beverly and Kenny Rose, best friend: Grace Schuette, and numerous aunts, uncles, cousins, and dear friends. A Celebration of Alyssas' Life will be held at 10:00 A.M., Monday, February 3, 2014 at Roby Funeral Home in Plattsmouth, NE with Pastor Michael Lincoln officiating, Dacia Rodriguez and Trisha Whitehead as speakers, and Trisha Whitehead as vocalist. At the family's request, please dress in colorful clothing or your normal attire...not funeral black! Visitations will be held from 1-6 P.M., Sunday, February 2, 2014 at Roby Funeral Home. Interment will be at Oak Hill Cemetery in Plattsmouth, NE. In lieu of flowers, please make a donation to Omaha Children's Hospital or Texas Children's Hospital in Alyssas' name.

ALYSSA ANN JOHNSON 1998 - 2014 Alyssa Ann Johnson Age 15 of Plattsmouth, NE passed away peacefully in the loving arms of her mother on Sunday, January 26, 2014 at Texas Children's Hospital in Huston, TX. She was born on March 29, 1998 to Christina... View Obituary & Service Information

The family of Alyssa Ann Johnson created this Life Tributes page to make it easy to share your memories.

Send flowers to the Johnson family.