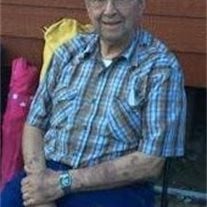 ANTHONY JOHN ROTUNDO 1931 – 2015 Anthony "Tony" John Rotundo age 83 of Plattsmouth, NE passed away peacefully on May 20, 2015 at the Bellevue Medical Center in Bellevue, NE. Tony was born on June 27, 1931 to Anthony George and Mary Anna (Buynak) Rotundo in Cleveland, OH. He was raised and educated in Cleveland and graduated from high school with the class of 1949. Tony enlisted in the US Air Force in 1951, serving his country for twenty one years, during the Korean Conflict and the Vietnam War. He and his family lived in several different locations, while he was in the Air Force, finally settling in Omaha, NE. Tony retired from the Air Force as a Personnel Specialist in 1973. Then, he worked for the US Postal Service in Omaha for thirteen years. In 1999, Tony and Shirley moved into their dream home in Buccaneer Bay, NE and they have been there since. He was a member of the Church of the Holy Spirit, Lepert Wolever V.F.W. Post #2543, and Fraternal Order of Eagles Aerie #365 all of Plattsmouth. Tony is survived by his wife: Shirley Rotundo of Plattsmouth, NE, three sons: Rick Rotundo and wife Kimberly of Omaha, NE, Thomas "Denny" Rotundo and wife Lori of Bellevue, NE, Matthew Rotundo and wife Tracy of Omaha, NE, two daughters: Deborah Campbell and husband Patrick of Oak Grove, MN, Brenda Pacholski and husband Steve of Papillion, NE, fifteen grandchildren, twenty two great grandchildren, four brothers: David Rotundo of Portsmouth, VA, Alan Rotundo and wife Marlene of Vermilion, OH, Ronald Rotundo and wife Renee of Cincinnati, OH, John L. Rotundo and wife Louisa of Hurst, TX, numerous nieces, nephews, cousins, and many friends. He was preceded in death by his parents: Anthony Rotundo and Mary A. Rotundo-Denzler and his sister in law: Lu Rotundo. A Funeral Mass will be held at 10:30 A.M., Wednesday, May 27, 2015 at Church of The Holy Spirit in Plattsmouth with Father David Azanbawu officiating, Deborah Campbell as lector, Jim Ulrich as acolyte, Terry Little as vocalist, and Jolene Rogge as organist. The Rosary will be held at 7:00 P.M., Tuesday, May 26, 2015 at Church of The Holy Spirit. Visitation will be held from 3:00 P.M. to 7:00 P.M., Tuesday, May 26, 2015 at Church of The Holy Spirit. The Pallbearers will be William Rotundo, Christopher Rotundo, Joseph Campbell, Jesse Rotundo, Jacob Pacholski, and Gavin Howard. Military Rites will be conducted by Lepert Wolever V.F.W. Post #2543 of Plattsmouth. The Burial will be at 2:00 P.M., Wednesday, May 27, 2015 at St. John's Cemetery in Bellevue, NE. Memorials to the Family (A suitable charity will be chosen at a later date).

The family of Anthony "Tony" John Rotundo created this Life Tributes page to make it easy to share your memories.