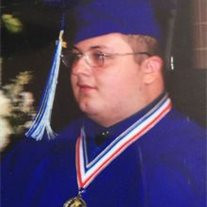 ANTONIO DONALD GONZALEZ 1994 – 2016 Antonio Donald Gonzalez age 22 of Omaha, NE passed away peacefully on Thursday, June 16, 2016 at Creighton University Medical Center in Omaha. He was born on May 13, 1994 to Inocencio I. and Tami Jo (Tilson) Gonzalez in Omaha. Antonio was raised and schooled in Omaha. He graduated from I.L.P. in Omaha with the class of 2013. Antonio loved spending time with his family and friends. Antonio is survived by his parents: Inocencio and Tami Gonzalez of Omaha, NE; brother: Jessie Gonzalez of Omaha, NE; sister: Carmen Gonzalez of Omaha, NE; maternal grandmother: Virginia Tilson of Omaha, NE; paternal grandfather: Pedro Gonzalez of Mexico; numerous aunts, uncles, cousins, and many friends. He was preceded in death by his maternal grandfather: Donald Tilson and his paternal grandmother: Carmen Jimenez. A Visitation will be held from 5:00 to 7:00 P.M., Monday, June 20, 2016 at Roby Funeral Home in Plattsmouth, NE. The Funeral Service will be held at 11:00 A.M., Tuesday, June 21, 2016 at Roby Funeral Home in Plattsmouth with Pastor Carl Anderson officiating. The Pallbearers will be Jessie Gonzalez, Joel Gonzalez, Philiberto Gonzalez, Porfilro Gonzalez, Rufino Gonzalez, and Jason Tilson. His final resting place will be at Lewiston Cemetery in Murray, NE. Memorials to the Family.

The family of Antonio Donald Gonzalez created this Life Tributes page to make it easy to share your memories.

Send flowers to the Gonzalez family.