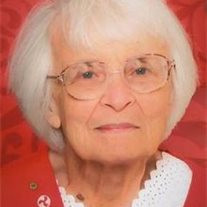 Arlene Olney 1924-2017 Arlene Olney, living in Palm Coast, Florida, with her son and daughter-in-law, went home to be with her Lord whom she loved on May 26, 2017, a week short of her 93rd birthday. Born in Nebraska on June 3, 1924 she was preceded in death by her husband of nearly 42 years, Ward Olney, by her parents, Fred & Mabel (Hilfiker) Engelkemeier, and by her grandparents, Julius & Mary Anna (Kaffenberger) Hilfiker and August & Matilda (Kirchoff) Engelkemeier. She leaves behind her son and daughter-in-law, Tom and Nadine (Bailey) Olney of Palm Coast, Florida. Arlene was the first person in her family to go to college and was a librarian for most of her career, serving libraries in Lincoln, Nebraska; Evanston, Illinois; the famous New York City Public Library; Lake Katrine, New York; and finally, back in her home town of Plattsmouth, Nebraska. No longer confused from dementia and now free from pain, she is enjoying everlasting life because her sins are forgiven through Jesus' sacrifice on the cross and His rising from the dead to give her life anew. The family wishes to express their deep thanks for the many expressions of love and prayers through this time and especially to the staff of the Florida Hospital Hospice. A Memorial Graveside Service will be held at 10:00 A.M., Friday, August 25, 2017 at Oak Hill Cemetery in Plattsmouth, to be followed by a light luncheon at St. Paul's United Church of Christ, Avenue A and North 5th Street, Plattsmouth. A memorial service in Florida was held at Palm Coast Bible Church, 94 Whiteview Parkway, Palm Coast, Florida, on June 17, 2017. In lieu of flowers, memorial donations are suggested in Arlene's memory to the Plattsmouth, Nebraska, Public Library; St. Paul's UCC, Plattsmouth, Nebraska; or to Palm Coast Bible Church, Palm Coast, Florida.

The family of Arlene Olney created this Life Tributes page to make it easy to share your memories.

Send flowers to the Olney family.