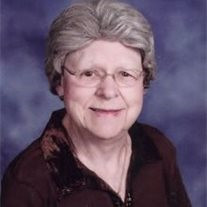 ARVILLA JOSEPHINE SCANLAN January 21, 1927 – July 17, 2017 Arvilla Josephine (Woslager) Scanlan age 90 of Plattsmouth, NE passed away on Monday, July 17, 2017 at Hillcrest Country Estates in Papillion, NE. She was born on January 21, 1927 to Raymond Alois and Margaret Helen (Fangman) Woslager in Templeton, IA. She was raised and schooled in Templeton and graduated from Sacred Heart High School with the class of 1944. After graduating from high school, she worked at Livestock National Bank in South Omaha, NE. She met Bartholomew "Bart" John Scanlan and they were later married on May 21, 1955 at St. Bridget's Catholic Church in Omaha. Arvilla and Bart made their home and raised their girls in Plattsmouth. Arvilla was stay at home mom, until her daughters were in high school. Then she worked as a bank teller at Cass County Bank in Plattsmouth for sixteen years until she retired in 1986. Arvilla was a member of the Church of the Holy Spirit, Catholic Daughters of America, and the PCCW (Parish Council of Catholic Women). She is survived by her two daughters: Margaret Mary Winters and husband Ken of Plattsmouth, NE; Nancy Haney and husband Alan of Omaha, NE; four grandchildren: John Winters and fiancée Carolyn Offutt; Ryan Winters and wife Robin; Scott Suhr; Cara Henderson and husband Ron; three great grandchildren: Emmy Henderson, Mya Henderson, and Kyle Henderson; sister: JoAnn Revers and husband Tom of Omaha, NE; sister in law: Geraldine "Gerry" Scanlan of Papillion, NE; numerous nieces, nephews, cousins and many friends. She was preceded in death by her parents: Raymond and Margaret Woslager, her husband: Bart Scanlan, and great grandson: Oliver Jay Winters. Visitations will be held from 1:00 to 5:00 P.M., with family greeting relatives and friends from 3:00 to 5:00 P.M., Thursday, July 20, 2017 at Roby Funeral Home in Plattsmouth. Rosary Service will be held at 7:00 P.M., Thursday, July 20, 2017 at Church of The Holy Spirit in Plattsmouth. A Funeral Mass will be held at 10:00 A.M., Friday, July 21, 2017 at Church of The Holy Spirit with Father Michael Houlihan officiating, Joy Scanlan as lector, Jeff Scanlan as acolyte, Larry Jensen as vocalist, and Laurie Hajek-Jones as organist. The Pallbearers will be John Winters, Ryan Winters, Scott Suhr, Dean Revers, Ron Henderson, and Jeff Scanlan. Her Final Resting Place will be at Holy Sepulchre Cemetery in Plattsmouth. The family suggests Memorials to Church of The Holy Spirit, St. John School, or for Masses. Services are entrusted to Roby Funeral Home, 346 Ave. A, Plattsmouth, NE 68048. (402) 296-3123 robyfuneralhome.com

The family of Arvilla Josephine Scanlan created this Life Tributes page to make it easy to share your memories.

Send flowers to the Scanlan family.