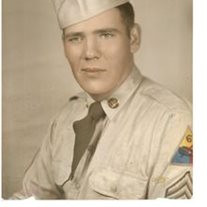 BERNARD OMER PIERCE 1928 – 2016 Bernard Omer Pierce, "The Maverick" age 87 of Plattsmouth, NE, passed peacefully away on Wednesday, May 4, 2016 at his residence. He was born on October 27, 1928 to Omer David and Myrle Nellie (Haynie) Pierce in Thurman, IA. Bernard was raised and schooled in Bartlett, IA. He worked as a truck driver and lived in Washington State. Then Bernard enlisted in the US Army and served his country for six years during the Korean Conflict from 1952 until 1958. After serving his country, he worked as a farmer in Logan, IA and a heavy equipment operator in Plattsmouth. He met and married Gloria Kimsey in 1961. Then he worked as a self-employed trucker hauling rock and sand during the construction of Interstate 80 from 1960 until 1972. Then Bernard worked for Sapp Bros in Millard, NE from 1972 until 1977, then drove truck for John Altschaffl, and was a heavy equipment operator for Cork Snodgrass until he became disabled and retired. Bernard also bought and sold timbers and guns for the last twenty eight years. He was a founding member of River City Social Club, a member of Midwestern Mobileers, worked with Dr. Sanguinary, Jerry Lewis, and Jackson Cling and others to raise money for Muscular Dystrophy and other causes for many years, and he was member of the Cass County Sheriff's Office Special Posse Emergency Response Team working with Fred Tesch during flood control, storm warnings, and crowd control. Bernard is survived by his daughter: Donna Barton and husband Christopher of Plattsmouth, NE; son: David "Tony" Pierce and wife Kathy of Plattsmouth, NE; six grandchildren: Dylan Porter, Michelle and Michael Adams, Liz McPeek, Christopher Barton, and Jessica Sayre; many great grandchildren, sister: Wanda L. McCollum of Plattsmouth, NE; numerous nieces, nephews, cousins, and many friends. He is preceded in death by his parents: Omer and Myrle Pierce, two sisters: Garnet "Sweed" Pierce, Josephine Jenkins, and half-brother: Raymond Wyant. Visitations will be held from 1:00 to 9:00 P.M., with family greeting relatives and friends from 6:00 to 8:00 P.M., Monday, May 9, 2016 at Roby Funeral Home in Plattsmouth. A Funeral Service will be held at 10:30 A.M., Tuesday, May 10, 2016 at Roby Funeral Home with Chris Barton officiating. The Pallbearers will be Tony Pierce, Donna Barton, Chris Barton, Rick McCollum, Randy Ray, and Dan Feder. The Honorary Pallbearers will be Dylan Porter, Michael Adams, Christopher Barton, Angi Ulrich, Joshua Statler, Larry Taylor, and the late Mark Hudson. Military Rites will be conducted by Iowa National Guard Funeral Honors. His final resting place will be at Thurman Cemetery in Thurman, IA. The family suggests memorials to Happy Paws.

The family of Bernard "The Maverick" Omer Pierce created this Life Tributes page to make it easy to share your memories.