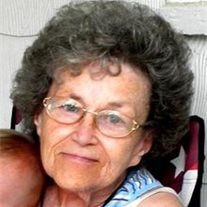 BETTY ANN KOUBEK 1930 - 2015 Betty Ann Koubek, age 84, of Plattsmouth, NE passed away peacefully on Sunday, July 19, 2015 at Hillcrest Country Estates in Papillion, NE. She was born on November 18, 1930 to Frank Edward and Helen Lillian (Cechal) Koubek in Plattsmouth, NE. Betty was raised and schooled in Plattsmouth and graduated from Plattsmouth High School with the class of 1948. Betty made her home in rural Plattsmouth. She had worked at the Base Exchange Cafeteria at Offutt Air Force Base in Bellevue, NE, Nagl Brush Factory in Omaha, NE, Stan's Bakery in Plattsmouth, and as a checker at Walt's Market in Plattsmouth. She was a lifelong rural Plattsmouth resident until 2011, when she moved to Bellevue, NE. She is survived by her sister: Josephine "Jo" Pfeffer of Bellevue, NE, numerous nieces, nephews, and many friends. She was preceded in death by her parents: Frank and Helen Koubek and her two sisters: Shirley J. Larsen and Rosalyn Covert. A Funeral Service will be held at 10:30 A.M., Thursday, July 30, 2015 at Roby Funeral Home in Plattsmouth with Pastor Michael McGregor officiating. Visitations will be held from 1:00 to 9:00 P.M., Wednesday, July 29, 2015 with the family greeting relatives and friends from 6:00 to 8:00 P.M. at Roby Funeral Home. Final Resting Place will be at Oak Hill Cemetery in Plattsmouth. The Pallbearers will be Daniel Covert Jr., Louis Gasper, Dennis Larsen, Greg Larsen, Kirk Pfeffer, and Thomas Pfeffer. The Honorary Pallbearers will be Robert Bushnell, Daniel Covert Sr., Shane Jensen, Tregg Lunn, Eugene O'Neill, and Stanley Zych. Memorials to the Family (A suitable charity will be chosen at a later date).

The family of Betty Ann Koubek created this Life Tributes page to make it easy to share your memories.

Send flowers to the Koubek family.