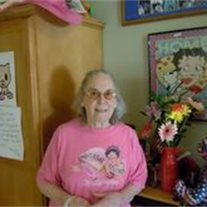 BETTY ANN MARTIN 1929 - 2015 Betty Ann (Robinson) Martin age 85 of Plattsmouth, NE formerly of Larned, KS and La Marque, TX passed away on Tuesday, June 2, 2015 at the Golden Living Center in Plattsmouth, NE. She was born on July 4, 1929 to Claude Allen and Elizabeth Louise (Savori) Robinson in La Marque, TX. She was raised and schooled in La Marque and graduated from La Marque High School. After graduating from high school, Betty was married and was a wife, homemaker, and a stay at home mom. Then she went to college and became a Licensed Vocational Nurse. She lived in Larned, KS and worked at the Kansas State Hospital until she retired. She moved to Bellevue, NE in 2006, to be near her son Brian and his family. Later, she moved to Golden Living Center in Plattsmouth, NE. Betty is survived by her two daughters: Claudia McBee and husband Ron of Texas City, TX, Rebecca Parker of Hutchinson, KS, two sons: Stacy Martin and wife Deana of Brookfield, MO, Brian Martin and wife Cindy of Schertz, TX, eighteen grandchildren, thirteen great grandchildren, brother: Allen Robinson of Brownsville, TX, numerous nieces, nephews, cousins, and many friends. She was preceded in death her parents: Claude and Elizabeth Robinson, sister-in-law: Betty Sue Robinson, and son-in-law: Roger Parker. A Memorial Service will be held at a later date in Texas. In lieu of flowers, the family suggests memorials for Alzheimer's Research at https://act.alz.org/site/Donation2 in memory of Betty Ann Martin.

The family of Betty Ann Martin created this Life Tributes page to make it easy to share your memories.

Send flowers to the Martin family.