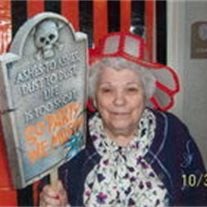 BEULAH GLEE BENEFIEL 1918 - 2014 Beulah Glee (Strohm) Benefiel age 95 of Plattsmouth, Nebraska passed away on Monday, March 3, 2014 at the Nebraska Masonic Home in Plattsmouth. She was born on July 24, 1918 to Oscar E. and Harriet Rebecca (Bailey) Strohm in Windom, Kansas. Beulah was raised and schooled in Little River, Kansas and graduated from Little River High School with the class of 1936. She met the love of her life, Lloyd John Benefiel and they were later married on April 1, 1956 at First Presbyterian Church in Lyons, Kansas. Beulah and Lloyd made their home and raised their son, John in Lyons, Kansas. She was a wife, mother, and homemaker. In 2008, Beulah moved to the Nebraska Masonic Home in Plattsmouth, Nebraska. She is survived by her son: John Benefiel and wife Karen of Omaha, NE, sister: Berta Dee Archer of Lyons, KS, and numerous nieces, nephews, cousins, and many friends. Beulah was preceded in death by her parents: Oscar and Harriet Strohm, husband: Lloyd Benefiel, and three brothers: Laurence, LaVern, and Wayne Strohm. A Funeral Service will be held at 3:00 P.M., Friday, March 7, 2014 at First Presbyterian Church in Lyons, KS with Pastor Bill McConnelee officiating and Helen Stockstill as organists. Visitations will be held from 1:30 – 3:00 P.M., Wednesday, March 5, 2014 at the Nebraska Masonic Home in Plattsmouth, NE. Interment will be at Lyons Municipal Cemetery in Lyons, KS. The family suggests Memorials to First Presbyterian Church, 221 S. Pioneer Ave., Lyons, KS 67554 and/or Nebraska Masonic Home, 1300 Ave. D, Plattsmouth, NE 68048.

The family of Beulah Glee Benefiel created this Life Tributes page to make it easy to share your memories.

Send flowers to the Benefiel family.