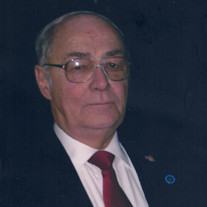 BILLY JOE CORBIN 1930 – 2020 Billy “Bill” Joe Corbin, age 89 of Plattsmouth, NE passed away on Thursday, February 13, 2020 at Nebraska Medicine in Omaha. He was born on November 1, 1930 to Lawrence Cecil and Lola Naomi (Farley) Corbin in Pennsboro, WV. Bill was raised and schooled in Morgantown, WV and he graduated from Morgantown High School with the class of 1948. Then he attended and graduated from West Virginia University with a business degree. He met Florence Elizabeth Peterson and they were later married on June 21, 1953 in Morgantown. Bill was commissioned in the U.S. Air Force and he served his country for twenty years during the Korean and Vietnam wars. Bill and Florence made their home and raised their daughter in Europe and in many different locations in the United States while Bill was serving his country. In 1972 they settled in Plattsmouth, where Bill, Florence, and Susan raised and showed quarter horses. After Bill retired from Air Force he worked at Creighton University as an accountant for ten years. He loved watching NASCAR and football, especially the West Virginia Mountaineers “Go Mountaineers”. Bill was an Elder and Deacon at First Presbyterian Church in Plattsmouth. He was a Perpetual Life Member of Masonic Lodge #6 A.F. and A.M. in Plattsmouth and served as Worshipful Master in 2004. He was also a member of the following appendant bodies: Nebraska Chapter No. 3, Royal Arch Masons serving as High Priest in 2010, Adoniram Council No. 5, Cryptic Masons serving as Illustrious Master in 2009, Mt. Zion Commandery No. 5, Knights Templar serving as Commander in 2011, Sir Galahad Priory No. 7, Knights of the York Rite Cross of Honour, Order of the Silver Trowel, Order of High Priesthood, Scottish Rite Omaha Valley, and the National Sojouners. Bill was a member of the Order of Eastern Star Home Chapter #189 in Plattsmouth serving as Worthy Patron in 2006, 2007, and 2013, and he was a member of the Tangier Shrine in Omaha. He is survived by his wife: Florence Corbin of Plattsmouth, NE; his daughter: Susan Corbin of Plattsmouth, NE; two nieces: Judy Majeskie of Centreville, MD; Cassidy Alexander of Millington, MD; his nephew: Troy Alexander of Millington, MD; and many friends. He is preceded in death by his parents: Lawrence and Lola Corbin. Visitations for Bill will be from 5-8 P.M., with Masonic and Eastern Star Rites at 7:00 P.M., on Tuesday, February 18, 2020 at Roby Funeral Home in Plattsmouth. A Funeral Service will be held at 10:00 A.M., Wednesday, February 19, 2020 at First Presbyterian Church in Plattsmouth with Pastor Matthew Coplen officiating and Mary Ann Stevens as organist. The Honorary Pallbearers will be Steve Kahler and Jay Speck and Bill’s poker buddies: Weldon Condit, Dave Peck, Ralph Palmer, Gary Sogard, John Sullivan, and Wes Tuttle. Military Rites will be conducted by the Offutt Air Force Base Military Rites Team of Bellevue, NE. The family suggests Memorials to First Presbyterian Church. Services Entrusted to Roby Funeral Home, 346 Ave. A, Plattsmouth, NE 68048 (402) 296-3123 robyfuneralhome.com

The family of Billy Joe Corbin created this Life Tributes page to make it easy to share your memories.

Send flowers to the Corbin family.