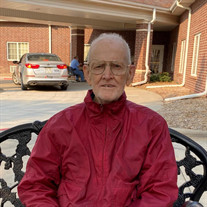 BILLY HOBBS 1925 – 2021 Billy Hobbs age 96, of Lincoln, NE formerly Plattsmouth, NE and Milwaukee, WI died on Friday, September 10, 2021 in Lincoln. Billy was born on June 14, 1925 to Curtis and Gladys (Day) Hobbs in Plattsmouth. Billy attended Plattsmouth High School and he graduated in 1942. He then served in the Army Air Corp from June 12, 1943 until February 22, 1946. He received the American Theater Ribbon, a Good Conduct Medal and the Victory Ribbon. Upon separation he was an Aviation Cadet. Billy then attended the University of Nebraska at Lincoln where he earned his bachelors degree in electrical engineering. Billy worked as an electrical engineer for a number of years in the Milwaukee Wisconsin area. Upon his return to Plattsmouth, he continued his career as an electrical engineer with Leo A. Daly Architecture firm in Omaha. Billy returned to Plattsmouth to care for his aging mother, Gladys Day Hobbs until her death. Billy will be remembered as a loving son, brother and uncle. He was a private pilot, an avid hunter and fisherman, and an accomplished trap shooter. He was a life time member of the National Rifle Association. He is survived by his sister: Ruth Ann Hobbs McLeod of Bryan, TX; and his nieces and nephews: Robert Sims, Martin Sims, Bill Sims, Cindy Clark-Mahan and husband Troy Mahan all of Texas, Bill Hobbs of Nebraska, Michael Hobbs of Minnesota, Heather Hobbs of South Carolina, Michelle Hobbs-Beecham and husband Chris Beecham of Nebraska, William Brian Barrow of Nebraska, and Tylor James Barrow of Nebraska. Billy is preceded in death by his parents: Curtis and Gladys Day Hobbs, his siblings: Delbert “Bud” Hobbs, Darold Hobbs, Eileen Hobbs-Zimmer, Betty Hobbs, and Carla Hobbs, brother-in-law: Bill McLeod, and his nephew: Hillie Dean Sims. A Graveside Service with be held at 1:00 P.M., on Friday, September 17, 2021 at Oak Hill Cemetery in Plattsmouth with Pastor Michael McGregor officiating. Military Rites will be conducted by Nebraska Army National Guard, Military Funeral Honor Guard. The Family suggests, Memorials to Donor’s Favorite Charity in Billy’s name. Services are entrusted to Roby Funeral Home, 346 Avenue A, Plattsmouth, NE 68048 (402) 296-3123 [email protected] www.robyfuneralhome.com

The family of Billy Hobbs created this Life Tributes page to make it easy to share your memories.

Send flowers to the Hobbs family.