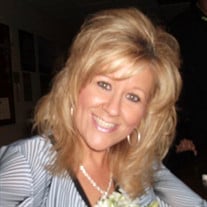 BRENDA LEE KNOPLE 1967 – 2019 Brenda Lee Knople age 52 of Plattsmouth, NE suddenly passed away on Thursday, October 3, 2019 at her residence. She was born on January 29, 1967 to Larry Kenneth Knople and Phyllis Maxine Snethen in Omaha, NE. Brenda was raised and schooled in Plattsmouth and graduated from Plattsmouth High School with the class of 1985. After graduating from high school, she started working at Omaha Vaccine. After working at Omaha Vaccine for twenty-two years, she worked at Xenon International Academy as an accountant. Brenda made her home and raised her son in Plattsmouth. Brenda is survived by her son: Dylan Knople of Plattsmouth, NE; mother: Phyllis McConnaughey and husband Jack of Auburn, NE; significant other: Dana Wie-Sel and his children Olivia and Colton Wie-Sel all of Omaha, NE; sister: Vicki Lacy and husband Alan of Bellevue, NE; niece: Kelby Feder; great-niece: Raegan Feder; cousins, and many many friends. She was preceded in death by her father: Larry Knople, maternal grandparents: Ira L. and Pauline Snethen, and paternal grandparents: Harry and Lillian Knople. Visitations will be held from 1:00 to 9:00 P.M. with family greeting relatives and friends from 6:00 to 8:00 P.M. on Tuesday, October 8, 2019 at Roby Funeral Home in Plattsmouth. A Funeral Service will be held at 10:30 A.M., Wednesday, October 9, 2019 at Roby Funeral Home in Plattsmouth with Pastor Michael McGregor officiating. Pallbearers will be Johnny Blotzer, Brent Hoschar, Vince Hoschar, Travis Maddux, David Tilton, and Tommy Snethen. Honorary Pallbearers will be Brett Feder, Brad Ocasio, Mike Ocasio, and Paul Ocasio. Final Resting Place will be at Oak Hill Cemetery in Plattsmouth. Memorials to the Family (A suitable charity will be chosen at a later date). Services Entrusted to Roby Funeral Home, 346 Ave. A, Plattsmouth, NE 68048. (402) 296-3123 robyfuneralhome.com

The family of Brenda Lee Knople created this Life Tributes page to make it easy to share your memories.

Send flowers to the Knople family.