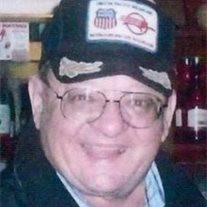 JOHN WILLIAM KISNER 1938 – 2016 CMSgt. John "Railroad" William Kisner age 77 of Plattsmouth, NE, passed away peacefully on Monday, March 7, 2016 at Hillcrest Health Plaza in Bellevue, NE. Railroad was born on November 20, 1938 to William and Naomi Ruth (Tobias) Kisner in Covington, OH. He was raised and school in Covington and graduated from Covington High School with the class of 1957. After graduating from high school, he enlisted in the US Air Force and proudly served his country for thirty years from November 18, 1957 until December 31, 1987. While serving in the Air Force, CMSgt. Kisner was a three time recipient of the distinguished Meritorious Service Medal and a four time recipient of the Air Force Commendation Medal. The Meritorious Service Medal and Air Force Commendation Medal are awarded in recognition of "Sustained Superior Performance" under your command. CMSgt. Kisner, also received four Outstanding Unit Citation Medals. The Outstanding Unit Citation Medal is awarded to individuals possessing talents to mentor others to perform as a cohesive unit of organizational excellence. He also attended the Air Force Community College and graduated with an Associates in Applied Science degree. Railroad retired from the Air Force as a Chief Master Sergeant on December 31, 1987. In 1986 Railroad moved to Plattsmouth, where he made his home prior to his retirement. Railroad had a passion for trains, he was a master gardener with a knack for growing beautiful flowers, and he enjoyed hanging out with his buddy Roscoe. He was a member of the Fraternal Order of Eagles Aerie #365 and Lepert Wolever V.F.W. Post #2543 both of Plattsmouth. He is survived by his brother: Dan Kisner and wife Judy of Covington, OH; nephew: Jason Kisner of Covington, OH; Nikki Kisner of Covington, OH; and many cousins and friends. Railroad was preceded in death by his parents: William and Ruth Kisner and his sister: Christine Kisner. Visitations will be held on Thursday, March 10, 2016 from 1:00 to 5:00 P.M. at Roby Funeral Home in Plattsmouth. A Rosary Service at 7:30 P.M., Thursday, March 10, 2016 at the Church of the Holy Spirit in Plattsmouth. A Funeral Mass will be held at 10:30 A.M., Friday, March 11, 2016 at the Church of the Holy Spirit in Plattsmouth with Father Loras K. Grell officiating, Keith Wiese as lector, Lynn Vinduska as acolyte, Terry Little as vocalist, Laurie Hajek-Jones as organist, and Joe Todero as bag piper. The Pallbearers will be Chip Bailey, Ken Christensen, Chris Fredrick, Randy Newburn, Roger Olson, and Lou Prohaska. Military Rites will be conducted by Lepert Wolever V.F.W. Post #2543 of Plattsmouth. Final Resting Place will be at the Omaha National Cemetery in Omaha, NE at a later date. The family suggests Memorials to the Wounded Warrior Project.

The family of CMSgt. John "Railroad" William Kisner created this Life Tributes page to make it easy to share your memories.