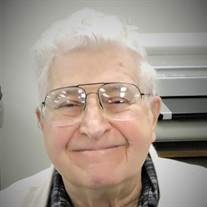 CARL REX BARNEY 1928 – 2020 Carl Barney, age 92 of Plattsmouth, NE formerly of Papillion, NE passed away on Tuesday, November 24, 2020 at The Nebraska Masonic Home in Plattsmouth. Carl was born on November 11, 1928 to Ralph Lawrance and Nora Ann (Wilson) Barney in Seward, NE. He was raised and schooled in Seward until he was twelve years old, when he moved with his family to Los Angeles, CA. Carl attended and graduated from Polytechnic High School with the class of 1942. He was in the Navy Reserves in California. Carl moved to back to the Omaha area in 1954. He worked as a cost accountant at Crown Cork and Seal, formerly known as Continental Can Company, in Omaha. He met Willa Mae Bals and they were later married in 1976 in Evergreen, CO. Carl and Willa made their home in Papillion for many years before they moved to Plattsmouth. He was a member of the Papillion Masonic Lodge #39 A.F. and A.M. Carl is survived by five children, three in-laws, ten grandchildren, thirteen great grandchildren, numerous nieces, nephews, cousins, and many friends. He was preceded in death by his parents: Ralph and Nora Barney, brother: Earl Barley, sister and brother-in-law: Pauline and Fred Mares, son: Earl Barney, and his wife: Willa Barney. A Memorial Service will be held at a later date. His Final Resting Place will be at Evergreen Cemetery in Omaha. Memorials to the Family (A suitable charity will be chosen at a later date). Services entrusted to Roby Funeral Home, 346 Ave. A, Plattsmouth, NE 68048 (402) 296-3123 robyfuneralhome.com

The family of Carl Rex Barney created this Life Tributes page to make it easy to share your memories.

Send flowers to the Barney family.