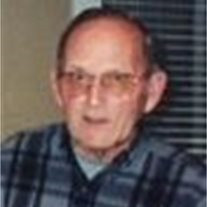 CHARLES DWAYNE SLUMP 1940 – 2016 Charles "Chuckie" D. Slump age 75 of Plattsmouth, NE passed away peacefully on Tuesday, May 17, 2016 at CHI Health Bergan Mercy in Omaha, NE. He was born on December 31, 1940 to Darwin Anthony and Mildred A. (Pullen) Slump in Sioux City, IA. Charles attended school at Ashland Park Grade School and South High School in Omaha, NE. After high school, he began working at a beef packing plant in Omaha. He met Sandra Kay Parriott and they were later married on February 17, 1968 at First United Methodist Church in Plattsmouth. Charles and Sandra made their home and raised their children in Omaha until 1976, when they moved to Plattsmouth. Chuckie loved spending time with his grandkids and he enjoyed hanging out with his friends at the boat club. He was a member of Fraternal Order of Eagles Aerie #365 of Plattsmouth. Charles is survived by his wife of 48 years: Sandra Slump of Plattsmouth, NE; daughter: Nikki Slump and Gene Konkler of Plattsmouth, NE; son: Jeffrey Slump and wife Jamie of Savannah, GA; four grandchildren: Kaitlyn, Owen, Gavin, and Gracie; brother: Ron Slump and wife Patti of Omaha, NE; sister: Norma Goble of Omaha, NE; numerous nieces, nephews, cousins, and many friends. He was preceded in death by his parents: Darwin and Mildred Slump and his brother-in-law: Al Goble. Visitations will be held from 1:00 to 9:00 P.M., with family greeting relatives and friends from 6:00 to 8:00 P.M., Thursday, May 19, 2016 at Roby Funeral Home in Plattsmouth. A Funeral Service will be held at 10:00 A.M., Friday, May 20, 2016 at Roby Funeral Home with Pastor Michael McGregor officiating. The Pallbearers will be Jesse Clark, Gary Hellwig, Shane Jensen, Charlie Konkler, Kevin Wagner, and Bob Voelker. The Honorary Pallbearers will be Dan Covert Sr., Danny Covert Jr., Larry Jensen, and Charles Konkler. His final resting place will be at Oak Hill Cemetery in Plattsmouth. The family suggests Memorials to Plattsmouth Volunteer Firefighter's Association.

The family of Charles "Chuckie" Dwayne Slump created this Life Tributes page to make it easy to share your memories.