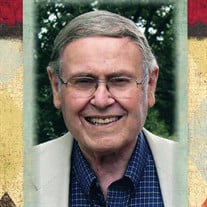 CHARLES JOHN WARGA JR. 1929 – 2020 Charles “Charlie” John Warga Jr., age 90 of Plattsmouth, NE peacefully passed away with his family at his side on Saturday, April 11, 2020 at his residence. He was born on September 23, 1929 to Charles John Sr. and Josephine M. (Vanek) Warga on his family farm southwest of Plattsmouth. Charlie started his education at Rock Bluff School and graduated from Plattsmouth High School in 1947. After graduating from high school, he attended classes at the University of Nebraska at Omaha (UNO). In his early years he helped his father in farming and livestock and he used his electronic knowledge in radio and television repair on the farm. In February 1957, he married Irene Gunia in Omaha, NE. It was then he began his business of television appliance sales and service. In 1961, he started Warga Realty, which he ran for 58 years until December 2019, during which time he constructed over 30 homes in the Plattsmouth and Beaver Lake area using local contractors. He also held a Nebraska Appraisers License. After much deliberation and planning, Charlie formed the Platte Broadcasting Company and built KOTD AM Radio Station in 1970. In 1993, KOTD FM also began operation. The stations served Plattsmouth and Omaha area for 32 years. He was also instrumental in the building of the 75 Mart convenience store near Beaver Lake in 1989. Charlie also participated in many community activities. He was a past Plattsmouth Rotary President, Past President of the Plattsmouth Chamber of Commerce, and serve many years on the Plattsmouth Planning Commission. Charlie also served on the Midlands Hospital board helping to oversee the construction of the hospital. In 1996, Charlie was crowned the Korn Karnival King. He also was awarded the Plattsmouth High School Alumni of the year in 2017. Charlie was a lifelong member of the Church of the Holy Spirit having served on the Parish Council, Knights of Columbus, and as an usher. His faith and family were the most important to him in life and he will be greatly missed by all of his family and many friends. Charlie is survived by his wife of 63 years: Irene, three sons and daughters-in-law: Steve (Joni), Tom (Sharon), Joe (Deb), one daughter and son-in-law: Mary Jo (John) Meisinger, 12 grandchildren: Melissa (Ish) Cole, Natalie (Matt) Powers, Angie Rain, Brett (Geneice) Warga, Dan (Jamie) Warga, Nathan (Annie) Meisinger, Nick Warga, Mike Warga, Joshua Warga (fiancee Krystell), David Warga, Sarah Warga, and Beki Warga, 12 great grandchildren, one brother-in-law and sister-in-law: George and Marsha Gunia, three nieces, one nephew, and many cousins and friends. He was preceded in death by his parents: Charles Sr. and Josephine Warga, his sister: Josephine M. Warga, and his great granddaughter: June Meisinger. Private Family Visitation for Charlie will be held on Tuesday, April 14, 2020 at Roby Funeral Home in Plattsmouth. Private Family Rosary will be held on Tuesday, April 14, 2020 at the Church of the Holy Spirit in Plattsmouth. A Private Family Funeral Mass will be held at 10:30 A.M., Wednesday, April 15, 2020 at Church of the Holy Spirit with Father Michael Houlihan officiating and Terry Little as vocalist. (See the Church of The Holy Spirit Facebook page for service streaming information.) The Pallbearers will be Stephen Warga, Thomas Warga, Joseph Warga, John Meisinger, Nathan Meisinger, Dan Warga, and David Warga. The Honorary Pallbearers will be Mike Warga, Joshua Warga, Brett Warga, and Nick Warga. His Final Resting Place will be at Holy Sepulchre Cemetery in Plattsmouth. The family suggests Memorials to Church of the Holy Spirit, Cass County Historical Society, or for Masses. Services Entrusted to Roby Funeral Home, 346 Ave. A, Plattsmouth, NE 68048 (402) 296-3123 robyfuneralhome.com

The family of Charles John Warga Jr. created this Life Tributes page to make it easy to share your memories.

Send flowers to the Warga family.