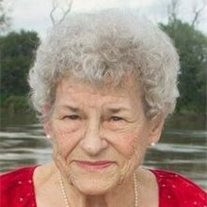 CLARICE MARIE FRAZIER 1932 – 2017 Clarice Marie (Rouse) Frazier age 84 of Plattsmouth, NE passed away on Thursday, February 9, 2017 at her residence. She was born on May 23, 1932 to Marion Dalton and Mable Mae (Arnold) Rouse in Plattsmouth. Clarice was raised and schooled in Plattsmouth and attended Plattsmouth High School. After high school, she worked as a waitress at Mom's Café for a year and then at Phil's Café for a year. She met and married Tom Morrison. Clarice was a wife, homemaker, and a stay at home mom. Clarice and Tom lived in many different locations while Tom was serving his country in the U.S. Army. They lived in Plattsmouth, Fort Aberdeen, MD, Fort Riley, KS, Fort Carson, CO, Camp Hale near Leadville, CO, Redstone Arsenal in Huntsville, AL, then they lived in Germany. While the Morrison's were traveling on the boat to Germany, Clarice met Elvis Presley and she was able to get autographs for herself and her girls. After living in Germany, they lived at Fort Leavenworth, KS, and they returned to Plattsmouth. Tom passed away in 1962. Clarice met Dayle Gene Frazier Sr. and they were later married on March 22, 1963 in Papillion, NE. Clarice and Dayle made their home in Plattsmouth. She is survived by her son: Dayle Gene Frazier Jr. and wife April of Bellevue, NE; step-son: Danny Gene Frazier of Pryor, OK; two daughters: Janice Morrison of Ralston, NE; Anna Vaughan and Tom of Papillion, NE; step-daughter: Denise Johnson and husband Brian of Norman, OK; her eight grandchildren: eight great grandchildren; two sisters: Janet Ilene Newburn of Concord, CA; Jean Irene Hoppe and husband Lynn "Carrol" of Plattsmouth, NE; her brother: Virgil Francis Rouse and wife Mary of Plattsmouth, NE; numerous nieces, nephews, cousins, and many friends. Clarice was preceded in death by her parents: Marion and Mabel Rouse, her two husbands: Tom Morrison and Dayle Frazier Sr., two sisters: Rose Mae Hamilton and Wilda Irene Jenkins, and her brother: Alfred Lee Rouse. Visitations will be held from 1:00 to 9:00 P.M., with the family greeting relatives and friends from 6:00 to 8:00 P.M., on Monday, February 13, 2017 at Roby Funeral Home in Plattsmouth, NE. A Funeral Service will be held at 10:30 A.M., Tuesday, February 14, 2017 at Roby Funeral Home in Plattsmouth with Pastor Michael McGregor officiating. The Pallbearers will be Jeremy Frazier, Zachary Frazier, Theodore Herman, Jered Klug, Lindsey Klug, Michael Smith, and Chris Vaughan. The Honorary Pallbearers will be Bill and Cathleen Brueggermann. Her Final Resting Place will be next to her husband Dayle Sr. at Oak Hill Cemetery in Plattsmouth. The family suggest memorials to the Plattsmouth Volunteer Firefighter's Association.

The family of Clarice Marie Frazier created this Life Tributes page to make it easy to share your memories.

Send flowers to the Frazier family.