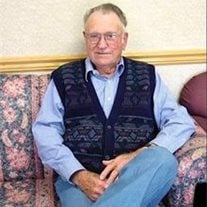 DALE MOORE HANSEN 1916 – 2014 Dale Moore Hansen age 98 of Plattsmouth, NE passed away peacefully on Friday, October 31, 2014 at the Nebraska Masonic Home in Plattsmouth. He was born on July 12, 1916 to Arthur Thomas and Willa Nell (Moore) Hansen in Laporte, CO. Dale was raised and schooled in Murray, NE. He graduated from Plattsmouth High School with the class of 1933. While Dale was in high school, he began farming and he continued to farm until 1940 when he began working as a Sales Representative for Federal Mogul Bearing Company. In 1940, he also married Florence Disbrow and to this union four children were born. He enlisted in the US Army and served his country during WWII for two years from 1944 to 1946. After serving his country, he continued working for Federal Mogul. Dale met Hedwig Louise "Peggy" Sulzen and they were later married in 1963. In 1972, at the age fifty six, he retired from Federal Mogul and bought a farm in Louisburg, KS. Dale farmed his land, he and Peggy traveled and wintered in Arizona. After seventeen years of marriage, Peggy passed away in 1980. Later, Dale remarried Gertrude "Jennie" Cross in 1989 in Plattsmouth, NE. When Dale's health began to fail, he moved to the Nebraska Masonic Home in Plattsmouth, NE. He was a member of the Masonic Peace Lodge #243 A.F. & A.M. in Louisburg, KS from 1953 until 1991 when he transferred to the Plattsmouth Masonic Lodge #6 A.F. and A.M. in Plattsmouth, NE. He had been a mason in good standing for sixty years and he was also a lifetime member of the American Legion John P. Hand Post #250 of Louisburg, KS. Dale is survived by his wife: Gertrude "Jennie" Cross Hansen of Port Townsend, WA, son: Dale Hansen Jr. and wife Ali of Athens, TX, three daughters: Nancy Floyd of Nine Mile Falls, WA, Janice Kaufmann and husband Steve of Meridian, ID, Cyndi Carne of Providence Village, TX, thirteen grandchildren, several great grandchildren, numerous nieces, nephews, cousins, and many friends. He was preceded in death by his parents: Arthur and Willa Hansen, wives: Florence Hansen, Peggy Hansen, brother: Rollin Hansen, sister: Gwendolyn Sullivan, and grandson: Brady Will Ryan. A Masonic Rites Service will be held at 2:00 P.M., Monday, November 3, 2014 at the Nebraska Masonic Home in Plattsmouth, NE. A Graveside Service will be held at 11:00 A.M., Tuesday, November 4, 2014 at Louisburg Cemetery in Louisburg, KS with Military Rites conducted by the American Legion John P. Hand Post #250 of Louisburg, KS. The family suggests memorials to the Nebraska Masonic Home and/or the Cass County Historical Society both of Plattsmouth, NE.

The family of Dale Moore Hansen created this Life Tributes page to make it easy to share your memories.

Send flowers to the Hansen family.