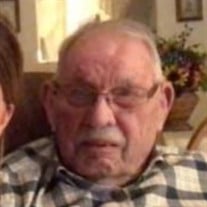 DARREL CARL NOLTE 1924 – 2021 Darrel Carl Nolte, age 96 of Omaha, NE passed away on Friday, January 29, 2021 at his residence. He was born on December 15, 1924 to Ferdinand Henry and Florence Christine (Hanson) Nolte in Bristol, SD. He was raised and schooled in Bristol until 1936, when he moved with his family to Plattsmouth, NE. Darrell attended Plattsmouth High School and he proudly served his country in the U.S. Navy for two years during WWII from 1945 until 1946. He met Mary Jane Tschirren and they were later married on June 3, 1949 in Plattsmouth. Darrel and Mary made their home in Plattsmouth until 1960, when they moved to Omaha. Darrel worked as a finishing carpenter for fifty years, building countless high-end residential homes in the Omaha area. Darrel is survived by his son: Larry Nolte and wife Barb of Omaha, NE; two grandchildren: Jennifer Sprouse of Council Bluffs, IA; Michael Nolte and wife Molly of La Vista, NE; two great grandsons: Owen and Isaac; numerous nieces, nephews, cousins, and many friends. He is preceded in death by his parents: Ferdinand and Florence Nolte, his wife: Mary Nolte, and his two brothers: Clifford Nolte and Leslie Nolte. A Funeral Service will be held at 11:00 A.M. on Wednesday, February 3, 2021 at Roby Funeral Home in Plattsmouth. The Pallbearers will be Mike Nolte, Owen Nolte, Isaac Nolte, Armond Kissel, Todd Mitteis, and John Tschirren. His Final Resting Place will be at Oak Hill Cemetery in Plattsmouth. Memorials to the Family (A suitable charity will be chosen at a later date). Services are entrusted to Roby Funeral Home, 346 Ave. A, Plattsmouth, NE 68048. (402) 296-3123 robyfuneralhome.com

The family of Darrel Carl Nolte created this Life Tributes page to make it easy to share your memories.

Send flowers to the Nolte family.