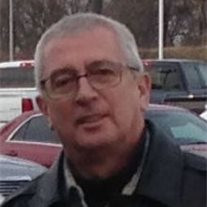 DAVID ARTHUR GOLLER 1954 – 2017 David Arthur Goller age 62 of Plattsmouth, NE passed away on Tuesday, January 24, 2017 at the Nebraska Medicine – Bellevue in Bellevue, NE. He was born on December 17, 1954 to Herbert John and Katherine (Pfaffenburger) Goller in Indianapolis, IN. David was raised and schooled in Springfield, IN and graduated from Springfield High School with the class of 1973. After high school, he attended Indiana University and graduated in 1977 with a Bachelors of Arts Degree. While in college, he met Carol Graham and they were later married on December 18, 1976 in South Whitley, IN. David was commissioned an officer in the US Air Force and served his country for twenty years. He continued his education while in the Air Force, graduating with a Master of Public Administration Degree from Central Michigan University and a Master of Business Administration Degree from Webster University. David and Carol lived in many locations from coast to coast and from border to border in the continental United States while David was in the Air Force, finally settling and making their home at Beaver Lake in Plattsmouth. After serving his country, David was a contractor for Honeywell and then for AeroThermo Technologies at Offutt Air Force Base in Bellevue. David was a Deacon and Chairman of the Board of Deacons at Lamb of God Lutheran Church in Papillion, NE and he was the Treasurer of the Beaver Lake Board in Plattsmouth. He was also a proud member of the NRA. He is survived by his wife of forty years: Carol Goller of Plattsmouth, NE; three sons: Erik Goller of Las Vegas, NV; Stephen Goller of Dallas, TX; Michael Goller of Buena Vista, CO; sister: Carolyn Goller of Cedar Edge, CO; & two brothers: Robert Goller and wife Donna of Springfield, MO; Herbert Goller and wife Becky of Indianapolis, IN; numerous nieces, nephews, cousins, and many friends. He was preceded in death by his parents: Herbert and Katherine Goller. A Memorial Service will be held at 11:00 A.M., Friday, January 27, 2017 at Lamb of God Lutheran Church in Papillion with Pastor Philip Houser officiating. Military Rites with be conducted by the Offutt Air Force Base Military Rites Team of Bellevue. In lieu of flowers, the family suggests memorials to the Lamb of God Lutheran Church, 1010 W. Lincoln St., Papillion, NE 68046.

The family of David Arthur Goller created this Life Tributes page to make it easy to share your memories.

Send flowers to the Goller family.