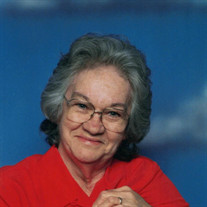 DONNA D. WEATHERBY 1938 - 2021 Donna D. (McCormick) Weatherby age 83 of Plattsmouth, NE departed this life on Tuesday, December 23, 2021 at the Prestige Care Center of Plattsmouth, having attained the age of 83 years, 11 months, and 21 days. She was born on January 2, 1938 to Merle Wyatt and Mabel Leona (Furlong) McCormick in Rock Bluff, NE. Donna was raised and schooled in Rock Bluff and she graduated from Plattsmouth High School with the class of 1954. After graduating high school, she met the love of her life, Lyle Eldon Weatherby, they dated, and were later married on May 22, 1955 at St. Paul’s United Church of Christ in Plattsmouth. To this union two daughters and four sons were born. Donna and Lyle made their home and raised their children in the Rock Bluff and Plattsmouth area. Donna was a stay at home mom and housewife. After her children were raised, she worked outside the home at several different jobs. Donna enjoying being around people and she always had a smile on her face and liked visiting with people. Donna was preceded in death by her parents: Merle and Mabel McCormick and her sister: Shirley Winds. She is survived by her husband of 67 years: Lyle E. Weatherby of Plattsmouth, NE, six children: Rick Weatherby of Iowa, Darla Lash and husband Pete of Papillion, NE; Nadine McLaughlin and husband Dan of Papillion, NE; Russell Weatherby and wife Denise of Plattsmouth, NE; Troy Weatherby and wife Laura of Plattsmouth, NE; Tracy Weatherby of Nemaha, NE; twelve grandchildren; thirteen great grandchildren; his brother: Ted McCormick and wife Christine of Colorado; plus a host of relatives and friends. A Graveside Service will be held at 1:00 P.M., on Tuesday, December 28, 2021 at Oak Hill Cemetery in Plattsmouth with Pastor Michael Lincoln officiating. The Pallbearers will be Sean McLaughlin, Scott McLaughlin, Craig Lash, Nathan Weatherby, Dan McLaughlin, and Courtney Weatherby. Memorials to the Family (A suitable charity will be chosen at a later date). Services are entrusted to Roby Funeral Home, 346 Avenue A, Plattsmouth, NE 68048 (402) 296-3123 [email protected] www.robyfuneralhome.com

The family of Donna D. Weatherby created this Life Tributes page to make it easy to share your memories.

Send flowers to the Weatherby family.