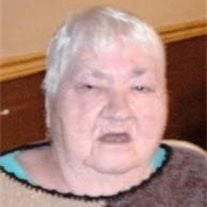 DORIS MARIE BRUNS 1935 – 2014 Doris Marie (Study) Bruns age 79 of Plattsmouth, NE passed away on Saturday, June 14, 2014 at the Golden Living Center in Plattsmouth, NE. Doris was born on March 23, 1935 to Ira "Bud" and Rosa Lee (Reeves) Study in Thurman, IA. She was raised and schooled in Thurman and worked with her parents on the family farm. Doris moved to Plattsmouth, NE in the late 1940's and lived with her sister, Viola until 1950 when she moved to Tecumseh, NE and worked in a restaurant. She met the love of her life Harlin Harvey Bruns and they were later married on June 19, 1952 in Plattsmouth, NE. Doris and Harlin made their home in Talmage, NE for forty two years. She worked at the Morton House in Nebraska City, NE for several years. After Harlin's death in 1995, she moved back to Plattsmouth. She was member of First Lutheran Church and Lepert Wolever V.F.W. Post #2543 Auxiliary both of Plattsmouth, NE. Doris is survived by her daughter: Carol Gerking and husband Lowell of Talmage, NE, three grandchildren, seven great grandchildren, sister: Marilyn Keppler and husband Ronald of Livingston, MT, numerous nieces, nephews, cousins, and many friends. She was preceded in death by her parents: Ira "Bud" and Rosa Study, husband: Harlin Bruns, three sisters: Viola Lyons, Jeanelle Wasson, and Maria Long, and two brothers: Donald Study and Louis Study. A Funeral Service will be held at 10:00 A.M., Friday, June 20, 2014 at Roby Funeral Home in Plattsmouth, NE with Pastor Lloyd Stuhr officiating. Final Resting Place will be at Thurman Cemetery in Thurman, IA. The family suggests memorials to First Lutheran Church and/or Plattsmouth Community Foundation.

The family of Doris Marie Bruns created this Life Tributes page to make it easy to share your memories.

Send flowers to the Bruns family.