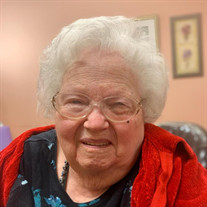 DOROTHY “DOTTIE” MARIE HULA 1930 – 2020 Dorothy “Dottie” Marie (Ptacek) Hula, age 90 of Plattsmouth, NE entered into eternal rest on Sunday, September 27, 2020 at Via Christe Assisted Living in Omaha, NE. She was born on August 13, 1930 to Frank Joseph Sr. and Agnes Matilda (Gradoville) Ptacek in Sedalia, MO. When Dottie was one year old, she moved with her family to Omaha, NE. She was raised and schooled in South Omaha. She attended St. Peter Catholic Grade School and Dottie graduated from South High School with the class of 1949. She met the love of her life Eugene “Gene” Edward Hula and they were later married on June 24, 1950 in Plattsmouth at Holy Rosary Catholic Church. Dottie and Gene made their home and raised their children in Plattsmouth. After Gene passed, she worked as the activities director at The Nebraska Masonic Home until she retired in 1993. Dottie was a loving wife, mother, grandma, great grandma, and a homemaker. Dottie was a member of the Church of the Holy Spirit, P.C.C.W., and the Catholic Daughters all of Plattsmouth. She is survived by her two daughters: Suzanne Goodrich and husband Jerry of Oxnard, CA; Mary Gregg of Bellevue, NE; four sons: David Hula of Plattsmouth, NE; Mark Hula and wife Cheryl of Plattsmouth, NE; Greg Hula and wife Janet of Bellevue, NE; Paul Hula and wife Cathy of Bellevue, NE; ten grandchildren; five great grandchildren; numerous nieces, nephews, cousins, and many dear friends. Dottie is preceded in death by her parents: Frank Sr. and Agnes Ptacek, beloved husband: Gene Hula, two brothers: Richard Ptacek, Frank Ptacek Jr., her sister: Agnes Girard, and her twin sister: Kathleen Ptacek. A Visitation will be held from 1:00 P.M. to 5:00 P.M. on Thursday, October 1, 2020 at Roby Funeral Home in Plattsmouth. Visitations will resume at 6:00 P.M., Thursday, October 1, 2020 at the Church of the Holy Spirit in Plattsmouth with a Rosary at 7:00 P.M. A Funeral Mass will be held at 10:30 A.M., on Friday, October 2, 2020 at Church of the Holy Spirit with Father Michael Houlihan officiating, Terry Little as vocalist, and Laurie Hajek-Jones as organist. *Covid 19 guidelines will be followed at the mortuary and church.* The Pallbearers will be Andrew Hula, Jason Hula, Joel Gammon, Brian Hula, Johnny Hula, and Anson Dsouza. Her Final Resting Place will be at Holy Sepulchre Cemetery in Plattsmouth. The Family suggests Memorials to Church of the Holy Spirit. Services entrusted to Roby Funeral Home, 346 Ave. A, Plattsmouth, NE 68048 (402) 296-3123 robyfuneralhome.com

The family of Dorothy "Dottie" Marie Hula created this Life Tributes page to make it easy to share your memories.

Send flowers to the Hula family.