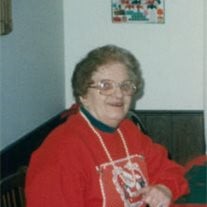 EDITH IRMA ERIKA YOUNG 1928 - 2016 Edith Irma Erika (Trieloff) Young age 87 of Plattsmouth, NE passed away peacefully on Thursday, March 10, 2016 at Josie Harper Hospice House in Omaha, NE. Edith was born on March 24, 1928 to Paul Fritz Karl and Lieschen Bertha (Blank) Trieloff in Karlsberg, Germany. She was raised and schooled in Bloomberg, Germany. Edith worked with her family as a tenant farmer until April of 1945, when her family left Bloomberg because the Russians had taken control of the area. Edith and her family moved to northern Germany, where the British were in control. On July 2, 1952, she met Noble Junior Young in Germersheim, Germany. Edith and Noble dated and where later married on January 3, 1953 in Germersheim. Edith and Noble lived in Germersheim and shortly after they were married Noble received his orders from the Navy to return to the United States. Edith didn't have her visa, so she stayed in Germersheim until Noble returned. Noble returned and was stationed in Munich and later Frankfurt. While Noble was stationed in Munich, their first daughter Liliane was born in Germersheim. On July 2, 1956, Edith and Lily traveled to New York, NY and then moved in with Noble's parents in Kirksville, MO. She studied and passed the U.S. Citizenship Exam in St. Louis, MO. While living in Kirksville, their second daughter Patty was born. While Noble was serving our country, Edith and Noble lived and raised their family in Badkreuznach, Germany where their third daughter Shirley was born, the Young's had lived in Massachusetts, Alabama, Virginia, and finally settled in Plattsmouth, NE where her youngest daughter Peggy was born. Edith was a loving wife, mother, and a homemaker. Edith was a member of Lepert Wolever V.F.W. Post #2543 Auxiliary of Plattsmouth. She is survived by her four daughters: Liliane "Lili" Bruscino of Omaha, NE; Patricia Young of Colorado Springs, CO; Shirley Young of Plattsmouth, NE; Peggy Dormer and husband Kevin of Plattsmouth, NE; two grandsons: Christopher Bruscino and wife Libby of Omaha, NE; Bradley Dormer of Plattsmouth, NE; three great grandchildren: Joey Bruscino, Gia Bruscino, and Trenton Marasco, numerous nieces, nephews, cousins, and many friends. She was preceded in death by her parents: Paul and Lieschen Trieloff, brother: Werner Trieloff, sister: Erika Reinewardt, her husband of thirty four years: Noble Young, son-in-law: James Bruscino, and grandson: Jason Marasco. Visitations will be held from 1:00 to 9:00 P.M., with family greeting relatives and friends from 6:00 to 8:00 P.M., Monday, March 14, 2016, at Roby Funeral Home in Plattsmouth. A Funeral Service will be held at 10:30 A.M., Tuesday, March 15, 2016 at Roby Funeral Home in Plattsmouth with Pastor Michael McGregor officiating. The Pallbearers will be Christopher Bruscino, Bradley Dormer, Kevin Dormer, and Trenton Marasco. Final Resting Place will be at Oak Hill Cemetery in Plattsmouth. The family suggest Memorials to the Plattsmouth Rescue Squad.

The family of Edith Irma Erika Young created this Life Tributes page to make it easy to share your memories.