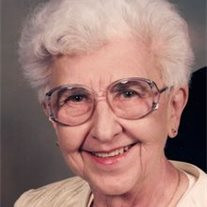 ELEANOR YORK 1925 – 2018 Eleanor (Scott) York age 92 of Plattsmouth, NE passed away on Sunday, April 29, 2018 at The Nebraska Masonic Home in Plattsmouth. She was born on July 11, 1925 to Roy James and Ethyl Maude (Hamilton) Scott in North Bend, NE. Eleanor was raised and schooled in North Bend and she graduated from North Bend High School with the class of 1942. After graduating from high school, she taught in a country school for one year to save money for college. She then attended and graduated from Tarkio College, MO in 1947 with a B.A. Eleanor met Joe C. York at Tarkio and they were later married on June 18, 1947 in North Bend, NE. Eleanor and Joe made their home and raised their daughter in Plattsmouth. Eleanor was a teacher for most of her working life except for 10 years in the 1950s that she spent working as an actuarial assistant at Mutual of Omaha. Eleanor was a member of First United Methodist Church and she was a past Worthy Matron of the Order of Eastern Star Home Chapter #189 both of Plattsmouth. She is survived by her daughter: Barbara Baker and husband Greg of Vancouver, WA; two grandchildren: Sarah Baker and husband Michael Dean of Sydney, Australia; Samuel Baker of San Francisco, CA; numerous nieces, nephews, cousins, and many friends. She was preceded in death by her parents: Roy and Ethyl Scott, husband: Joe York, sister: Margaret Willey, her two brothers: Herbert and Willard Scott as well as two nieces and a nephew. A Memorial Service will be held at 3:00 P.M., Saturday, May 12, 2018 at First United Methodist Church in Plattsmouth with Pastor Lane Bailey officiating and Donna Glynn as organist. Her final resting place will be at Oak Hill Cemetery in Plattsmouth. The Family suggest Memorials to Joe C. York Scholarship Fund, the Cass County Historical Society or the First United Methodist Church stained glass restoration project. Services are entrusted to Roby Funeral Home, 346 Ave. A, Plattsmouth, NE 68048. (402) 296-3123 robyfuneralhome.com

The family of Eleanor York created this Life Tributes page to make it easy to share your memories.

Send flowers to the York family.