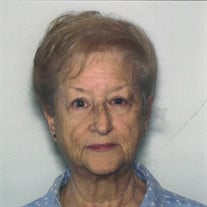 ELIZABETH ANN HALL 1939 – 2022 Elizabeth “Liz” Ann (Yelick) Hall age 79 of Waldorf, MD formerly of Plattsmouth, NE passed away on Thursday, March 17, 2022 at her home in Waldorf, MD. Liz was born on March 3, 1943 to Theodore "Pete" Jack and Maxine Florence (Ptacek) Yelick in Plattsmouth. She was raised and schooled in Plattsmouth and she graduated from Plattsmouth High School with the class of 1961. After graduating from high school, Liz worked for Mutual of Omaha Insurance Co. before moving to Maryland. She then started working for the civil engineering division on Andrews Air Force Base. Liz then began her carrier as a civilian with the Department of Security for the United States Air Force obtaining the grade of GS15 which she was most proud of before retiring. She was a member of the First United Methodist Church and Liz was a Past Worthy Matron of Order of Eastern Star Home Chapter #189 both in Plattsmouth. Liz is survived by her husband: Walter Hall Jr. of Waldorf, MD, son: Thomas Hall Sr. and his wife Denise of La Plata, MD, her daughter: Katherine Friz of Mount Airy, MD, four grandchildren: Thomas Hall Jr., Grace, Laila, and Noelle Friz; numerous cousins, and friends. She was preceded in death by her parents: Pete and Maxine Yelick and her son-in-law: Dan Friz. Visitations will be held from 6:00 to 8:00 P.M., Tuesday, March 29, 2022 with an Eastern Star Service at 7:00 P.M. at Roby Funeral Home in Plattsmouth. A Funeral Service will be held at 11:00 A.M., Wednesday, March 30, 2022 at First United Methodist Church in Plattsmouth with Pastor Lee Wigert officiating. The Pallbearers will be Thomas Hall Sr., Thomas Hall Jr., and Bruce Yelick. Her Final Resting Place will be at Oak Hill Cemetery in Plattsmouth. The Family suggests Memorials to The Nebraska Masonic Home of Plattsmouth. Services are entrusted to Roby Funeral Home, 346 Avenue A, Plattsmouth, NE 68048 (402) 296-3123 [email protected] www.robyfuneralhome.com

The family of Elizabeth Ann Hall created this Life Tributes page to make it easy to share your memories.

Send flowers to the Hall family.