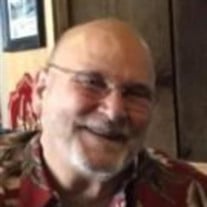 GARY DEAN PATRIAS 1941 – 2021 Gary “Pat” Dean Patrias, age 79 of Minden, NV passed away on Friday, May 7, 2021 at the Carson Tahoe Regional Medical Center in Carson City, NV. He was born on August 6, 1941 to Sylvester Emil Patrias and Edna Marie Wyman in Minneapolis, MN. Pat was named after Gary Cooper, who was his mother's favorite actor. Pat was the oldest of three boys. Unfortunately when Pat was 8 years old, his father died of a massive heart attack. Here was his mother alone with three boys aged 8, 4 and 2. How was she to make money to raise this family? Fortunately, she had a large 2 story house. She rented the upstairs rooms to single parents with children. She collected room rent and babysat their children while they were at work. All of the boys missed their father very much and the baby cried and cried and said he wanted a daddy. As luck would have it, Edna took a liking to one of the renters, George Imm, and they eventually married and the boys had a step-daddy. It was unique that this whole family had birthdays in the month of August (the first 15 days, in fact). Brother Doug and George the 3rd, Pat the 6th, Bruce the 8th and Edna the 15th. Sylvestor's birthday was New Year's Eve. Pat had a paper route for pocket money. As he got older, he set pins in a bowling alley. At the age of 17 he and his best friend from Minnesota joined the Air Force by having his mother sign the paperwork. The boys spent Basic Training in Texas together but then his friend went to South Dakota and Pat ended up being stationed at Offutt. While stationed at Offutt, Pat met Irene Catharine Meisinger and they were later married on December 2, 1961 at St. Paul's United Church of Christ in Plattsmouth. Pat had a cool 58 Chevy Convertible. Pat and Irene made their home in Plattsmouth until he was discharged in 1963. He said he didn't really want to settle in to Minnesota, and a good Air Force friend (who had married a Plattsmouth girl) told Pat they were moving to California, to his home state, and offered a place to stay with them until getting settled. After spending a month in Minnesota with his parents, they rented a U-Haul trailer, packed it up and headed to Rosemead, California. Pat's new Oldsmobile Cutlass had a real tiny bumper, so they had to hitch the trailer to Irene’s old 54 Ford for the trip. Pat drove alone and a friend’s mother rode with Irene. They ended up getting an apartment in the same complex their friends were living in. Then Cathy was born (the apple of Pat's eye) and they moved to Rowland Heights and their friends moved to San Jose. Pat went to work for an electronics company in 1963 that manufactured potentiometers (example: a radio volume dial) and retired 30 years later. He did some consulting work, but because of his bad headaches, he kept house and fixed dinners while Irene was working. He got double pneumonia in November/December and came home with oxygen. He fell 5 times between December and February 14th when the Paramedics took him to the hospital. He still had pneumonia. Because of Covid, the family could only visit 6 hours a day and one person at a time. He was transferred to a Rehab center (which allowed no visitation because of Covid) where they gave him Physical Therapy, etc., until he fell again two days before he was to be discharged. Back to hospital where they determined the falls were caused because his heart was pausing. Back to Rehab and then the family could visit and take the dog. Finally got to bring him home April 12th but he had a GI bleed on April 18th and Paramedics returned him to the hospital. They said he had an ulcer the size of a half dollar. Back to Rehab but his oxygen remained too low and they returned him to the hospital May 7th and they found a blood clot in his lung which they could not remove. Then they discovered a disease called DIC caused by an infection, with no cure. Irene, Cathy, and Rob all got to tell him goodbye and he passed very peacefully. Pat is survived by his wife: Irene Patrias of Minden, NV; his daughter: Catharine “Cathy” Simpson and husband Rob of Minden, NV; his brother: Bruce Patrias and wife Diane of Laramie, WY; sister in law: Carolee Patrias of Coon Rapids, MN; numerous nieces, nephews, cousins, and many friends. He is preceded in death by his father: Sylvester Patrias, mother and step father: Edna and George Imm, and his brother: Douglas Patrias. Visitation will be held from 6:00 to 8:00 P.M., on Monday, May 24, 2021 at Roby Funeral Home in Plattsmouth, NE. The Funeral Service will be held at 10:30 A.M., on Tuesday, May 25, 2021 at Roby Funeral Home with Pastor Michael McGregor officiating. The Pallbearers will be Patrick Patrias, Mark Meisinger, Jamie Winterstein, Brian Kuehl, Dan Wolterman, and Brent Wolterman. His Final Resting Place will be at Oak Hill Cemetery in Plattsmouth. Military Rites will be conducted by the Offutt Air Force Base Military Funeral Honors Team of Bellevue. Memorials to St. Paul's United Church of Christ in Plattsmouth. Services are entrusted to Roby Funeral Home, 346 Avenue A, Plattsmouth, NE 68048 (402) 296-3123 [email protected] www.robyfuneralhome.com

The family of Gary Dean Patrias created this Life Tributes page to make it easy to share your memories.

Send flowers to the Patrias family.