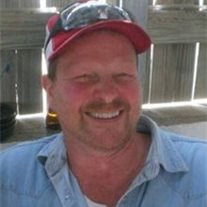 HARLEY HOWE HACKWITH 1960 – 2014 Harley Howe Hackwith: (His Dad always wanted a child with triple "H" initials.) He was born on December 15, 1960, the fifth of six children, to Robert "Bob" Galen and Emma Reine (Topliff) Hackwith in Mason City, IA. He was intelligent, witty, energetic, and all boy; nicknamed "Chuck" by his siblings after Charley Brown. Harley graduated from Plattsmouth High School with the class 1979. He later graduated from the Motorcycle Mechanics Institute in Phoenix, AZ as a Certified Harley Davidson Technician in 2004. He was best known for his quiet acts of service for family and friends, Harley was never one to "toot his own horn". His parents would consistently wake on snowy mornings to a plowed driveway or return home from a trip with a freshly mowed lawn. There are many tales of good deeds, errands, and repairs from all who knew him, yet untold. Behind him he left a path of tidiness, caring, and loyalty. He could be a real pistol. We think his Scotch/Irish heritage is responsible for that lively sense of humor as well as the stubborn streak, but who is going to point fingers? His love of rum, though, certainly can't be ethnic. Harley was an avid mechanic and fixer upper, he restored and sold autos, motorcycles, and homes in his spare time. In earlier years he enjoyed motorcycle hill climbing competitions. Although life was not always perfect, Harley consistently demonstrated an innate sense of right and wrong. A terrific friend and standup guy, he was his own man, his own drummer. Son, brother, uncle, friend. He was a quiet complex man, an enigma in many ways. So missed, so loved. Harley is survived by his siblings: Kathy (Mark) Groth of Aurora, CO, Rob (Gail) Hackwith of Lincoln, NE, Randi (Robert) Van Dyne of Plattsmouth, NE, Holly Hackwith of Omaha, NE, Monte (Theresa) Hackwith of Bellevue, NE, numerous aunts, uncles, nieces, nephews, and legions of friends. He was preceded in death by his parents: Robert and Emma Reine Hackwith. A Celebration of Life will be held from 3:00 to 7:00 P.M., Saturday, January 3, 2014 at Lepert Wolever V.F.W. Post #2543 in Plattsmouth. The family suggests memorials to the Plattsmouth Public Library or to Donor's Favorite Charity.

The family of Harley Howe Hackwith created this Life Tributes page to make it easy to share your memories.

Send flowers to the Hackwith family.