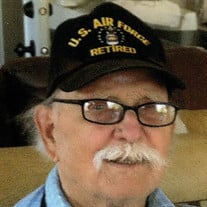 HARRY CHARLES MARKER 1930 - 2019 Harry Charles Marker age 89 of Plattsmouth, NE passed away on Friday, November 29, 2019 at his residence. He was born on June 4, 1930 to Herman Durwand and Ann Mary (Gibson) Marker in St. Joseph. MO. He was raised and schooled in St. Joseph and Harry graduated from St. Joseph High School with the class of 1948. After graduating from high school, Harry enlisted in the U.S. Army Air Corp and he went to basic training at Lackland Air Force Base in San Antonio, TX. Then he was stationed at McChord Air Force Base in Tacoma, WA, Naval Station Everett, WA, Fort Lewis in Seattle, WA, Camp Stoneman in Pittsburg, CA, Lowry Air Force Base in Denver, CO, and then Germany. He retired from the Air Corps after serving his country for ten years, after only 60 days Harry re-enlisted in the U.S. Air Force at the Whiteman Air Force Base near Kansas City, MO. He continued at serve his country for another twelve years in the Air Force. Harry was stationed at Offutt Air Force Base in Bellevue, NE, but he also spent a year in Vietnam and eighteen months at Andrews Air Force Base in Washington D.C. He retired from the Air Force in 1968. Harry met Ruth Ann Hendrix and they were later married on April 13, 1957 at Grace Methodist Church in Omaha, NE. Ruth and Harry made their home and raised their children in Plattsmouth. Harry, Ruth, and their children lived in Alexandria, WA for eighteen months while Harry was stationed at Andrews Air Force Base. After Harry retired from the Air Force, he worked as a photo processor at Eastman Kodak in Omaha for eighteen years. He retired from Eastman Kodak and then he worked at the Plattsmouth Air Port for five years. He was a member of First United Methodist Church and Lepert Wolever V.F.W. Post #2543 both of Plattsmouth. He is survived by his daughter: Bernita Zimmer and husband Steve of Plattsmouth, NE; granddaughter: Amber Wilkins and husband Ryan of Plattsmouth, NE; grandson: Patrick Zimmer and wife Jessica of La Vista, NE; sister: Connie J. Hammons of St. Joseph, MO; brother: John D. Marker of NC; numerous nieces, nephews, cousins, and many friends. He was preceded in death by his parents: Herman and Ann Marker, his son: Harold J. Marker, and his wife Ruth Marker. Visitations will be held from 1:00 to 9:00 P.M., Tuesday, December 3, 2019 with the family greeting relatives and friends from 6:00 to 8:00 P.M. at Roby Funeral Home. A Funeral Service will be held at 10:30 A.M., Wednesday, December 4, 2019 at Roby Funeral Home in Plattsmouth with Pastor Lloyd Stuhr officiating. Military Rites will be conducted by Offutt Air Force Base Military Rites Team of Bellevue, NE and Lepert Wolever V.F.W. Post #2543 of Plattsmouth, NE. The Honorary Pallbearers will be Steve Zimmer, Patrick Zimmer, Chuck Grancer, Mike Hammons, and Ryan Wilkins. Final Resting Place will be at Oak Hill Cemetery in Plattsmouth. Memorials to Lepert Wolever V.F.W. Post #2543 in Plattsmouth. Services are entrusted to Roby Funeral Home, 346 Ave. A, Plattsmouth, NE 68048 (402) 296-3123 robyfuneralhome.com

The family of Harry Charles Marker created this Life Tributes page to make it easy to share your memories.

Send flowers to the Marker family.