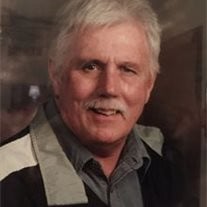 HERMAN CECIL KERNS 1948 – 2016 Herman Cecil Kerns age 68 of Plattsmouth, NE passed away on Saturday, November 12, 2016 at his residence. He was born on July 13, 1948 to and Lindon Lorenza and Sarah Elizabeth (Cochran) Kerns in Buckhannon, WV. Herman was raised and schooled in Buckhannon and he graduated from Buckhannon-Upshur High School with the class of 1966. After graduating from high school, he enlisted in the US Air Force and served his country during the Vietnam War for over three years from 1967 until 1970. While he was stationed at Offutt Air Force Base in Bellevue, NE, Herman met Georgia Rodriguez and they were later married on January 22, 1968 in Greenwood, NE. After he was discharged from the Air Force, Herman and Georgia made their home and raised their children in Omaha. He had worked at a gas station for two years, then Penske Truck Rental both in Omaha, until he began working at Omaha Steaks as a delivery truck driver. Herman and Georgia moved to Plattsmouth in 1995 and Herman retired from Omaha Steaks in 2011. He is survived by his wife of forty eight years: Georgia Kerns of Plattsmouth, NE; two sons: Keith Kerns of Plattsmouth, NE; Bradley Kerns and wife Brandi of Plattsmouth, NE; three grandchildren: Hannah Springer and fiancée Ian Handlon, Gabrelle Kerns, and Joseph Bradley Kerns; two great grandchildren: Leigha Springer, and Rogene Handlon; brother: Carroll Kerns and wife Barbara of Buckhannon, WV; sister: Hilda Ketterman and husband Terry of Buckhannon, WV; numerous nieces, nephews, cousins, and many friends. He is preceded in death by his parents: Lindon and Sarah Kerns. Visitations will be held from 1:00 to 5:00 P.M., Wednesday, November 16, 2016 at Roby Funeral Home in Plattsmouth. A Funeral Service will be held at 11:00 A.M., Thursday, November 17, 2016 at Roby Funeral Home with Pastor Michael McGregor officiating. The Pallbearers will be Keith Kerns, Brad Kerns, Jeremiah Grizzle, Calvin Gauff, Kennin Colestock, and Tony Cihacka. His final resting place will be at the Omaha National Cemetery. Military Rites will be conducted by Offutt Air Force Base Military Rites Team of Bellevue, NE. In lieu of flowers, the family suggests memorials to Family (A suitable charity will be chosen at a later date).

The family of Herman Cecil Kerns created this Life Tributes page to make it easy to share your memories.

Send flowers to the Kerns family.