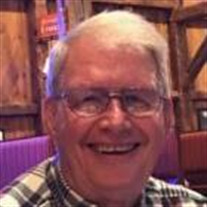 JAMES ALBERT KRAEGER 1940 – 2019 James Albert Kraeger age 79 of Palatine, IL passed away on Wednesday, August 14, 2019. James was born on May 27, 1940 to Albert Henry and Bernice Maurine (Arn) Kraeger in Omaha, NE. He married the late Judith K. “Judy” (Merten) on May 18, 1963 in Grand Island, Nebraska. James worked for 30 years with the U.S. Public Health Service in the Food and Drug Administration, retiring in 1996. James was a girls soccer coach for many years with the Palatine Celtic Soccer Club. James enjoyed watching his grandchildren play sports, traveling, especially his visits to Australia, Alaska, and Europe, and his daily visit to the local coffee shop where he would meet his close friends. He also enjoyed wintering in Las Vegas with his daughter, Jenny, which allowed him to visit with other family and friends. James was a lifelong fan of the Chicago Bears and Nebraska Cornhuskers. James is survived by his two children: Jeff Kraeger and wife Joyce and Jenny Kraeger; three grandchildren: Jake, Jill, and John Kraeger; and he is also survived by many nieces, nephews, and other loving family and friends. He was preceded in death by his parents: Albert and Brenice Kraeger, grandson: Joshua Kraeger, brother: Alan Kraeger, his twin sister that died at birth, and his wife of 52 years: Judy Kraeger. A Visitation will be held from 10:00 A.M. to 11:00 A.M., on Saturday, August 31, 2019 at Roby Funeral Home. A Graveside Service will be held at 11:00 A.M., on Saturday, August 31, 2019 at Oak Hill Cemetery in Plattsmouth with Father Michael Houlihan officiating. His Final Resting Place will be at Oak Hill Cemetery in Plattsmouth. In lieu of flowers, memorials in the memory of James would be appreciated to the Paralyzed Veterans of America. Services are entrusted to Roby Funeral Home, 346 Ave. A, Plattsmouth, NE 68048 (402) 296-3123 robyfuneralhome.com

The family of James Albert Kraeger created this Life Tributes page to make it easy to share your memories.

Send flowers to the Kraeger family.