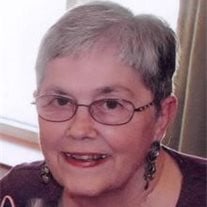 JANICE LOUISE HILD 1939 – 2017 Janice Louise (Lancaster) Hild age 77 of Murray, NE passed away on Friday, March 17, 2017 at her residence, surrounded by her family. She was born on December 3, 1939 to Raymond Alfred and Ruby Murlene (Worthan) Lancaster on the Lancaster family farm in rural Murray, NE. Janice was raised and attended grade school at Murray. She graduated from Plattsmouth High School with the class of 1957. After graduating from high school, she attended the University of Nebraska at Lincoln for a year. She met the love of her life Roger Dean Hild, in high school and were later married on June 6, 1959 at Murray Christian Church. Janice was a farm wife and a homemaker. Janice and Roger made their home on the Hild farm from 1975 until 2008, when they moved to Janice's parent's farm in Murray. Janice was a member of Murray Christian Church and the organist for over fifty years. She was a past Worthy Matron of the Order of Eastern Star Home Chapter #189, past Honored Queen of Jobs Daughters Bethel #24, and a member of Delta Gamma Sorority. She is survived by her husband of fifty seven years: Roger Hild of Murray, NE; two sons: Mark Hild of Lincoln, NE; Bryan Hild of Plattsmouth, NE; three granddaughters: Allycin, Lauren, and "PJ" (Patricia Jean) of Omaha; sister: Nancy Furse and husband Butch of Aurora, NE; and many friends. Janice was preceded in death by her parents: Raymond and Ruby Lancaster. Visitations will be held from 1:00 to 8:00 P.M., with the family greeting relatives and friends from 6:00 to 8:00 P.M., on Monday, March 20, 2017 at Murray Christian Church. An Eastern Star Service will be held at 7:00 P.M., Monday, March 20, 2017 at Murray Christian Church. A Funeral Service will be held at 10:30 A.M., Tuesday, March 21, 2017 at Murray Christian Church with Pastor Michael Njus officiating, Kevin James as organist, soloist will be Lisa Hild, and a duet by Norma and Larry Hammons. The Pallbearers will be Bill Jameson, Frank Jensen, Lance Ross, Jeff Stein, Roger Wehrbein, and Joey Worthan. Her Final Resting Place will be at Mount Pleasant Cemetery in Nehawka, NE. In lieu of flowers, the family suggest memorials to Murray Christian Church, or Donor's Favorite Charity.

The family of Janice Louise Hild created this Life Tributes page to make it easy to share your memories.

Send flowers to the Hild family.