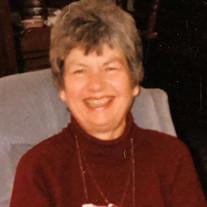 JEAN HOWLAND 1929 – 2019 Jean (Lloyd) Howland age 89 of Plattsmouth, NE peacefully passed away on Sunday, February 10, 2019 at her residence. She was born on June 18, 1929 to George Anderson and Dorothy Nell (Wehrbein) Lloyd in Murray, NE. Jean was raised and schooled in Murray and Plattsmouth. She moved with her family to Plattsmouth in 1940 and she graduated from Plattsmouth High School with the class of 1947. Jean was both valedictorian and president for her graduating class. She attended Peru State College and taught elementary school in the Plattsmouth city schools. She met Fred “Bill” William Howland Jr. and they were later married on June 10, 1951 at First Presbyterian Church in Plattsmouth. Jean and Bill made their home and raised their daughter in Plattsmouth. Later, Jean also worked at Plattsmouth State Bank drive in. Jean was a lifetime member of First Presbyterian Church, serving in many capacities through the years. She had been Circle President, Deacon, Elder, Clerk of Sessions, Sunday School Teacher, and President of Presbyterian Women. She was a member of the Library Foundation, past president of the Plattsmouth Library Board, Order of Eastern Star Home Chapter #189, and she was a past president of Chapter F P.E.O. She is survived by her daughter: Stephanie Howland-Moline of Omaha, NE; granddaughter: Nicole Moline of Omaha, NE; grandson: William Moline of Omaha, NE; numerous nieces, nephews, cousins, and many friends. She was preceded in death by her parents: George and Dorothy Lloyd, infant daughter: Pamela Howland, and her husband: Bill Howland Jr. Visitation will be held from 6:00 to 8:00 P.M., with Jean’s family, on Thursday, February 14, 2019 at First Presbyterian Church in Plattsmouth. The Funeral Service will be held at 10:30 A.M., Friday, February 15, 2019 at First Presbyterian Church with Pastor Matthew Coplen officiating, Jan Stuckey as pianist, and Carol Wehrbein as organist. The Pallbearers will be William Knorr, Robert Snider, Paul Lambert, Paul Decker, Anthony Sibbing, and Ted Wehrbein. The Honorary Pallbearers will be Joyce Heim, John and Wanda Hudson, Cheryl and Larry Henry, Bill and Sally Babbit, and Robert Tritsch. Final Resting Place will be at Oak Hill Cemetery in Plattsmouth. In lieu of flowers, Memorials to First Presbyterian Church or the Nebraska Humane Society. Services are entrusted to Roby Funeral Home, 346 Ave. A, Plattsmouth, NE 68048 (402) 296-3123, robyfuneralhome.com.

The family of Jean Howland created this Life Tributes page to make it easy to share your memories.

Send flowers to the Howland family.