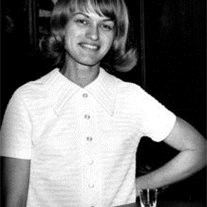 JEANIE KAY HICKMAN 1949 – 2016 Jeanie Kay (Keith) Hickman age 66 of Plattsmouth, NE peacefully joined her Lord and Savior in Heaven on August 16, 2016 at The Waterford at Woodbridge in Plattsmouth, NE. She was born in Pekin, Illinois on September 18, 1949 to Eldon and Shirley (Graff) Keith. She resided with her parents in Havana, IL. In 1958, they moved to the family farm in Ipava, IL. She attended V.I.T. High School in Table Grove, IL. In 1967, she moved to Plattsmouth, Nebraska with her husband, Karl "Pete" Hickman, a member of the United States Air Force, and their daughter Liz. In 1995, she married Grover Cundall Jr. in Plattsmouth. Jeanie worked for many years at Mom's Café and The Barracks restaurant in Plattsmouth. In the 1970s, she earned associate degrees in Business Administration and Accounting at Southeast Community College in Lincoln, Nebraska, and was a licensed Realtor. In 1995, she graduated with an RN, BSN from Clarkson College of Nursing in Omaha. She was employed by Golden Living in Plattsmouth from 1995 until her retirement in 2015. Jeanie is survived by her daughter: Liz (Mark) Heyner and granddaughter Liv, all of Evergreen, CO; sister: Julie (John) Moore of Manito, IL; uncle: Byron Keith of Havana, IL; aunt: Marilyn Graff of Pekin, IL; two nieces: Amaris Tippey of St. Louis, MO; Jenny (Dan) Kraft of Manito, IL; and three nephews: Joel (Stacey) Moore of Manito, IL; Josh (Kayla) Moore of Manito, IL, Kevin (Angie) Tippey of Petersburg, IL. She also leaves behind a great nephew, several great nieces, numerous cousins, and many friends. She was preceded in death by her parents: Eldon and Shirley Keith, husbands: Karl "Pete" Hickman, Grover Cundall, and sister: Ellen Tippey. A Memorial Service will be held at 11:00 A.M., Saturday, August 27, 2016 at First Lutheran Church with Pastor Lloyd Stuhr officiating and Marsha Fleming as organist. The family suggests memorials to Under His Wings Baby and Food Pantry, 511 Main St., Plattsmouth, NE 68048.

JEANIE KAY HICKMAN 1949 &#8211; 2016 Jeanie Kay (Keith) Hickman age 66 of Plattsmouth, NE peacefully joined her Lord and Savior in Heaven on August 16, 2016 at The Waterford at Woodbridge in Plattsmouth, NE. She was born in Pekin, Illinois... View Obituary & Service Information

The family of Jeanie Kay Hickman created this Life Tributes page to make it easy to share your memories.

Send flowers to the Hickman family.