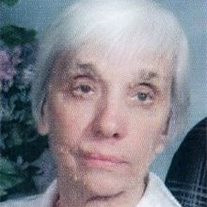 JOANN ARLENE SIKORA 1934 – 2016 JoAnn Arlene (Nichols) Sikora age 82 of Papillion, NE formerly of Plattsmouth, NE, passed peacefully away on Saturday, April 30, 2016 at the Josie Harper Hospice House in Omaha, NE. She was born on January 15, 1934 to Lester Floyd and Blanche Marie (Meyer) Nichols in Washington, IA. JoAnn was raised and schooled in Washington and graduated from Washington High School with the class of 1952. After graduating from high school, she went to work for Mutual of Omaha in Omaha, NE. JoAnn met Joseph "Joe" Henry Sikora Jr. at Whimpy's Café in Plattsmouth and they were later married on October 1, 1960 in Plattsmouth, NE. JoAnn and Joe made their home and raised their children in Plattsmouth. She was a wife, mother, grandmother, and a homemaker. She was a member of Church of the Holy Spirit in Plattsmouth. JoAnn is survived by her three sons: Stephen Sikora and wife Michelle of Eagle, NE; Gregory "Greg" Sikora and wife Dina of Overland Park, KS, Douglas "Doug" Sikora and wife Nancy of Omaha, NE; six grandchildren: Christopher, Stacie, Kylie, Amy, Alina, and David; sister-in-law: Donna Nichols of La Vista, NE; numerous nieces, nephews, cousins, and many friends. She is preceded in death by her parents: Lester and Blanche Nichols, husband: Joseph Sikora Jr., two sisters: Dorothy Olson and Margaret Moffat, and her brother: Ronald Nichols. Visitations will be held from 1:00 to 5:00 P.M., Friday, May 6, 2016 at Roby Funeral Home in Plattsmouth. A Rosary Service will be held at 7:00 P.M., Friday, May 6, 2016 at Church of The Holy Spirit in Plattsmouth. A Funeral Mass will be held at 10:30 A.M., Saturday, May 7, 2016 at Church of The Holy Spirit with Father Loras K. Grell officiating, Ken Rose as lector, Jim Ulrich as acolyte, Terry Little as vocalist, and Laurie Hajek-Jones as organist. Her final resting place will be at Holy Sepulchre Cemetery in Plattsmouth, next to her husband Joe. The family suggests memorials to St. John the Baptist School in Plattsmouth.

The family of JoAnn Arlene Sikora created this Life Tributes page to make it easy to share your memories.

Send flowers to the Sikora family.