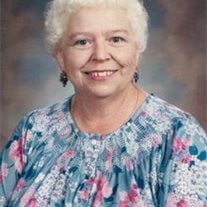 JOANN LOUISE MOORE 1931 - 2014 Joann Louise (Fitchhorn) Moore age 83 of Plattsmouth, NE passed away on Tuesday, April 15, 2014 at The Nebraska Medical Center in Omaha, NE. Joann was born on February 12, 1931 to Ira "Sam" Louis and Gladys "Virgie" Virginia (Gochenour) Fitchhorn by caesarian section at Methodist Hospital in Omaha, NE. She was raised on her family's farm near Rock Bluffs, NE. Joann attended elementary school for eight years at Rock Bluffs School and graduated from Plattsmouth High School with the class of 1947. After graduating from high school she attended and graduated from Peru State College and then she earned her Master's Degree in Elementary Education from the University of Nebraska at Lincoln. She was an elementary school teacher. Joann had taught at six different locations in rural Cass County for nineteen and half years, and then at Columbia School in Plattsmouth where she taught second grade for fourteen years and third grade for five years. After teaching for thirty eight and a half years, Joann retired in 1991. She met the love of her life, George Franklin Moore and they were later married on May 27, 1948 in Glenwood, IA. To this union there were born three daughters, Mary Ellen, Penelope Leann, and Vicki Dalene. There were many things Joann enjoyed. Her family, first and foremost. Her love of traveling which took her to all fifty states, every province in Canada except one, Mexico, and to Europe. (Her husband George, who had been stricken with polio in 1952 became an invalid but was still able to travel with her to visit all the states except Alaska.) Joann enjoyed reading, teaching school, caring for her flower garden, and numerous pots filled with a variety of blooms. She lavished love and affection on Penny and Vicki, her eight grandchildren, and her thirteen great grandchildren. Besides her career and caring for her family, Joann pursued other activities. She was a long-time member of First Christian Church in Plattsmouth where she served as a Sunday School Teacher and superintendent, and was a Christian Women's Fellowship deaconess for some time. She was a 4-H leader, and long-time member of Rebekah Lodge #40 in Plattsmouth, holding various offices on the local, district, and state levels. She was a member of the Cass County Historical Museum with special interest in Rock Bluffs School. She was active in Alpha Delta Kappa, an honorary teacher organization, Riverview Club, and a charter member of the Cass County Retired Educators Association. Joann was on the local board of the American Cancer Society, helping organize the first few years of the Relay for Life. She also assisted with the selling of daffodils. She worked on the Friends of the Library at the Plattsmouth Public Library, helping organize several book sales. She went on two missionary trips to Rolling Fork, Mississippi where she helped in the school, sewing room, and Lighthouse Store. Joann was chosen as a Lady of the Realm in the KKKKK. While teaching in the rural area, her school entered a float in the school parade winning several prizes. In 1989, Joann was pleased to receive the Favorite Teacher Award at the Karnival. This honor was determined by the number of letters submitted by former pupils. Joann remarked, "I have lived a wonderful life and wouldn't hesitate to repeat it." Joann leaves behind her daughter: Penelope "Penny" Moore and husband David of Plattsmouth, NE, eight grandchildren: Scott Pfeifer of Lincoln, NE, Shannon Hartley and husband Carl Jr. of Highland Springs, VA, Angela Keene of Plattsmouth, NE, Jason Moore of Plattsmouth, NE, Eric Moore of Plattsmouth, NE, Cory Pfeifer of Plattsmouth, NE, Tae-Randa Moore of Plattsmouth, NE, Matthew Moore and wife Tiffany of Plattsmouth, NE, thirteen great grandchildren, Brianna Keene, Joslyn Pfeifer, Ashley Sauls, Jesse Keene, Christian Pfeifer, Chelsea Pfeifer, Tyler Moore, Arien Moore, Jaiden Merrill, Devin Pfeifer, Eva Moore, Carl Hartley, Dakota Kennedy, her first great great grandchild expected soon, numerous nieces, nephews, cousins, special friends: Alyce, Betsy, Dolores, Dorothy, Jerry, Phyllis, Robert, and many other friends. She was preceded in death by her parents: Ira "Sam" and Gladys "Virgie" Fitchhorn, husband: George Moore, two daughters: Mary Ellen Moore and Vicki Brundieck, brother: Melvin Louis Fitchhorn, sister: Mary Ellen Monson, and great granddaughter: Alexis Mercedes Jayde Moore. A Funeral Service will be held at 10:00 A.M., Saturday, April 19, 2014 at First Christian Church in Plattsmouth, NE with Pastor Michael Lincoln officiating. Visitations will be from 1:00 – 9:00 P.M., with family greeting relatives and friends from 6:00 – 8:00 P.M., Friday, April 18, 2014 at Roby Funeral Home in Plattsmouth, NE. Pallbearers will be Joann's grandchildren: Scott Pfeifer, Shannon Hartley, Angela Keene, Jason Moore, Eric Moore, Cory Pfeifer, Tae-Randa Moore, and Matthew Moore. Honorary Pallbearers will be Joann's great grandchildren: Brianna Keene, Joslyn Pfeifer, Ashley Sauls, Jesse Keene, Christian Pfeifer, Chelsea Pfeifer, Tyler Moore, Arien Moore, Jaiden Merrill, Devin Pfeifer, Eva Moore, Carl Hartley, and Dakota Kennedy. Interment will be at Pleasant Ridge Cemetery in Plattsmouth, NE. There will be a luncheon following the burial at the First Christian Church Fellowship Hall in Plattsmouth. The family suggests memorials to the Cass County Historical Society for the preservation of Rock Bluffs School, First Christian Church, and/or Family's Choice.

The family of Joann Louise Moore created this Life Tributes page to make it easy to share your memories.

Send flowers to the Moore family.