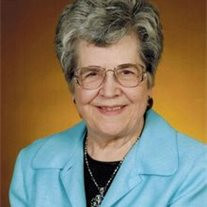 JOANNE HELENE DUNAWAY 1925 - 2016 Joanne Helene (Kurtz) Dunaway age 91 of Plattsmouth, NE formerly of Omaha, NE passed away on Wednesday, November 30, 2016 at The Nebraska Masonic Home in Plattsmouth. She was born on February 3, 1925 to John Winfield and Clarisse (Browne) Kurtz in Omaha, NE. She was raised and schooled Omaha, and graduated from Benson High School with the class of 1943. Then Joanne attended and graduated from the University of Nebraska at Omaha with a bachelor's degree in Home Economics. After graduating from UNO, she worked at Northwestern Bell in Omaha. Joanne met Emmett Harrison Dunaway Jr. and they were married on April 28, 1950 in Omaha. Joanne and Emmett made their home and raised their four children in Omaha. She was a wife, stay at home mom, grandma, and a homemaker. In 2014, Joanne moved to The Nebraska Masonic Home in Plattsmouth. She was a member of All Saints Episcopal Church in Omaha. Joanne is survived by her daughter: Laurie Dunaway of Omaha, NE; three sons: Douglas Dunaway of Desoto, KS; David Dunaway of Omaha, NE; Barry Dunaway and wife Rhonda of Bennington, NE; three grandchildren: Alyssa Rasmussen and husband Noal, Jaime Thomas, and Aidan Dunaway; two sisters-in-law: Betty Kurtz of Plattsmouth, NE; Gloria Mann and husband Jerry of Oakland, TN; and many beloved nieces, nephews, cousins, and many friends. She was preceded in death by her parents: John W. and Clarisse Kurtz, husband: Emmett Dunaway, and her brother: Winfield Browne Kurtz. A Memorial Service will be held at 2:00 P.M., Monday, December 5, 2016 at All Saints Episcopal Church in Omaha with Reverend Marisa Thompson officiating and Laura Scow as vocalist. Her Final Resting Place will be with her husband Emmett at All Saints Episcopal Church Columbarium in Omaha. The family suggests Memorials to All Saints Episcopal Church, The Nebraska Masonic Home, or to Donor's Favorite Charity.

The family of Joanne Helene Dunaway created this Life Tributes page to make it easy to share your memories.

Send flowers to the Dunaway family.