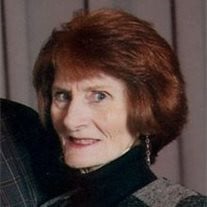 JOANNE KAY SCHUETZ 1943 - 2015 Joanne Kay (Turpenning) Schuetz age 71 of Plattsmouth, NE passed away peacefully on Friday, February 20, 2015 at the Bellevue Medical Center in Bellevue, NE. Joanne was born on December 21, 1943 to Grant and Stacia Anne (Chytil) Turpenning in Omaha, NE. She was raised and schooled in Omaha and graduated from South High School with the class of 1961. After graduating from high school, she attended Beauty College in Omaha and at the same time she worked at the First National Bank of Omaha from 1961 until 1964. She met Maurice Edward Schuetz and they were later married on July 18, 1964 in Fort Campbell, KY. Joanne and Maurice made their home in many different locations while Maurice was serving our country in the US Army. After Maurice retired from the Army, Joanne and Maurice made their home in Louisiana and later they returned to Omaha. In 2004, they moved to Plattsmouth and they have been here since. Joanne worked as a finance clerk for Conagra in Omaha and she was a wife, mother, grandmother, and a great grandmother. Joanne was a member of the D.A.R. (Daughters of the American Revolution) and First Presbyterian Church in Plattsmouth. Joanne is survived by her husband: Maurice Schuetz of Plattsmouth, NE, son: Mark Schuetz of Plattsmouth, NE, daughter: Julia Ludlow and husband Ronald of Plattsmouth, NE, four grandchildren: Wesley Ludlow and wife Sarah, Erin Ludlow, Ryan Ludlow, Austin Ludlow, two great grandchildren: Jacob Ludlow, Lilianna Ludlow, aunt: Albina Lad of Papillion, NE, numerous cousins, and many friends. She was preceded in death by her parents: Grant and Stacia Turpenning. A Funeral Service will be held at 10:30 A.M., Tuesday, February 24, 2015 at First Presbyterian Church in Plattsmouth with Pastor Becky Balestri officiating and Carol Wehrbein as organist. Visitations will be from 6:00 to 9:00 P.M., Monday, February 23, 2015 at Roby Funeral Home in Plattsmouth. Pallbearers will be Wesley Ludlow, Ryan Ludlow, Austin Ludlow, Daniel Peters, Daniel Theall, and Ryan Casal. Final Resting Place will be at Oak Hill Cemetery in Plattsmouth. Memorials to First Presbyterian Church.

The family of Joanne Kay Schuetz created this Life Tributes page to make it easy to share your memories.

Send flowers to the Schuetz family.