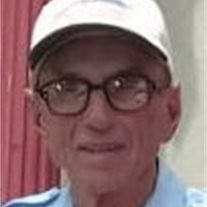 JOHN JESSE LADD Jr. 1928 – 2014 John Jesse Ladd Jr. age 86 of Murray, NE passed away on Friday, August 1, 2014 at the Bellevue Medical Center in Bellevue, NE. John was born on July 17, 1928 to John Jesse Sr. and Laura Ellen (Macklan) Ladd in Winterset, IA. At age 5, he and his family moved to Linden, IA and then at age 9 his family moved back to Winterset. He was raised and schooled in Winterset. He worked with his father on the family farm. Then he enlisted in US Army in August of 1946 and served in the army until December of 1947. John met Betty Marie Whited and they were later married on August 10, 1948 at Murdoch, NE. He was discharged until March of 1951, when he enlisted in US Air Force and served in the Air Force until retiring on January 1, 1970. He had lived rural Murray, NE since December of 1969. John had worked at Wilson Concrete, then at National By Products until retiring in August of 1987. After retiring, he worked as a bagger at the Commissary at Offutt Air Force Base in Bellevue, NE, to stay busy and be around people. He is survived by his three sons: John J. Ladd III of Bennington, NE, Henry H. Ladd of Louisburg, KS, David W. Ladd of Bennington, NE, three granddaughters: Ellen K. Ladd of Louisburg, KS, Lori Ann Jacobson of Raytown, MO, Melissa Sue Ladd of Merriam, KS, three great granddaughters: Nichole Jacobson, Abbie Jacobson, Madison Jacobson, and numerous nieces, nephews, cousins, and many friends. John was preceded in death by his parents: John J. Sr. and Laura Ladd, wife: Betty Ladd, five brothers: William, Everette, Walter, Marvin, and Boyd Ladd, and two sisters: Rose Ladd and Georgeanna Ferguso. A Funeral Service will be held at 2:00 P.M., Wednesday, August 6, 2014 at Roby Funeral Home in Plattsmouth with Pastor Michael Lincoln officiating. Visitations will be from 1:00 to 9:00 P.M., with the family greeting relatives and friends from 6:00 to 8:00 P.M., Tuesday, August 5, 2014 at Roby Funeral Home. Pallbearers will be John J. Ladd III, Henry H. Ladd, David W. Ladd, Justin K. Jones, William Heier, Phillip Ladd, and Don Bimes. Military Rites will be conducted by Lepert Wolever V.F.W. Post #2543 of Plattsmouth, NE. Final Resting Place will be at Oak Hill Cemetery in Plattsmouth, NE. The family suggests memorials to Murray Fire and Rescue.

The family of John Jesse Ladd, Jr. created this Life Tributes page to make it easy to share your memories.

Send flowers to the Ladd, family.