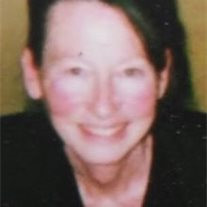 JOYCE MARIE SLATER 1957 – 2016 Joyce Marie (Yocum) Slater age 58 of Plattsmouth, NE passed away on Friday, August 26, 2016 at her residence. She was born on October 8, 1957 to William Howard and Hazel Marie (Mitchell) Yocum in Marshalltown, IA. Joyce was raised and schooled in Zearing, IA and she graduated from Colo-Nesco Senior High School. Then Joyce attended and graduated from Iowa State University with a degree in Human Services. After Joyce graduated from Iowa State, she made her home in Omaha, NE. Later she moved to Plattsmouth and has been here ever since. Joyce worked at Hy-Vee at 51st & Center for 17 years in the bakery and worked at the Child Development Center on Offutt Air Force Base in Bellevue, NE until two years ago when her health began to fail. Joyce was a member of the Church of the Holy Spirit in Plattsmouth. She is survived by her son: Nathaniel Slater stationed in Italy with the U.S. Army Airborne; daughter: Julie Slater of El Cajon, CA; father: William Yocum of St. Anthony, IA; sister: Linda Nowasell and husband Paul of Grinnell, IA; brother: Jeff Yocum and wife Kerry of Clemons, IA; seven nieces and nephews: Jacob Yocum, Jessy Yocum, Joshua Yocum, Brad Nowasell, James Nowasell, Joey Nowasell, Danielle Nowasell; numerous aunts, uncles, cousins, and many friends. Joyce was preceded in death by her mother: Hazell Yocum, paternal grandparents: Herman and Lena Yocum, and her maternal grandparents: Cornie and Maxine Mitchell. A Rosary will be held at 7:00 P.M., Friday, September 2, 2016 at the Church of the Holy Spirit in Plattsmouth. A Memorial Mass will be held at 11:00 A.M., Saturday, September 3, 2016 at the Church of the Holy Spirit in Plattsmouth with Father Loras K. Grell officiating, Mary Lou Salazar as lector, Pat Carroll as acolyte, and Terry Little as vocalist. Her Final Resting Place will be at Sacred Heart Cemetery in St. Anthony, IA. Memorials to the Family (A suitable charity will be chosen at a later date).

The family of Joyce Marie Slater created this Life Tributes page to make it easy to share your memories.

Send flowers to the Slater family.