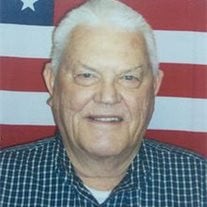 KENNETH EDWIN TODD 1922 – 2016 Kenneth Edwin Todd age 93 of Bellevue, NE formerly of Murray, NE passed away peacefully on Sunday, June 26, 2016 at the Eastern Nebraska Veterans Home in Bellevue. He was born on November 22, 1922 to Glen Roland and Virginia Dee (Garrison) Todd in Murray, NE. Ken was raised and schooled in Murray and graduated from Plattsmouth High School with the class of 1940. After graduating from high school, he attended Omaha University for a semester. Then he enlisted in the US Navy and served his country for three and a half years during WWII from 1942-1945. He met Ellen Marie Christensen and while Ken was still in the Navy they were married on June 11, 1945 in San Francisco, CA. Ken was discharged in October of 1945 and he returned to Murray, where he and Ellen made their home and later raised their children. He farmed for thirty years, then Ken owned and operated Cass County Concrete and Plattsmouth Ready Mix. Later he worked with his son Ed and he retired in 1987. Ken and Ellen lived on their family farm until 2005, when they moved to Bellevue to be closer to Martha because of Ellen's failing health. Ken was a member of Murray Presbyterian Church and Plattsmouth Masonic Lodge #6 A.F. and A.M. He is survived by his son: John Roger Todd of Omaha, NE; daughter: Martha Mardock and husband Don of Omaha, NE; four grandchildren: Dana Todd, Naomi Mardock, Luther Mardock, and Eli Mardock, four great grandchildren, numerous cousins, and many friends. He was preceded in death by his parents: Glen and Virginia Todd, step-mother: Alice Todd, his son: Ed Todd in 2002, and his wife Ellen Todd in 2009. A Memorial Service will be held at 11:00 A.M., Saturday, July 2, 2016 at Roby Funeral Home in Plattsmouth with Pastor Dale Powell officiating, Curt Butler as vocalist, and Rob O'Neil as organist. His final resting place will be at East Union Cemetery in Union, NE. In lieu of Flowers, the family suggests Memorials to the Visiting Nurses Association or the Eastern Nebraska Veterans Home.

The family of Kenneth Edwin Todd created this Life Tributes page to make it easy to share your memories.

Send flowers to the Todd family.