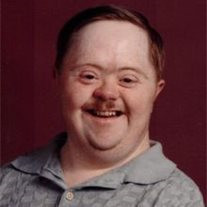 KENT DOUGLAS MEISINGER 1964 – 2015 Kent Douglas Meisinger age 51 of Plattsmouth, NE passed away peacefully on Friday, January 16, 2015 at the Golden Living Center in Plattsmouth. Kent was born on January 7, 1964 to Eldon Frederick and Eva Louise (Zikmund) Meisinger in Omaha, NE. He was raised and schooled in Plattsmouth, NE and he graduated from Plattsmouth High School. Kent had worked at ENCOR for many years and he also worked as a busboy at the Officers Club at Offutt Air Force Base in Bellevue, NE. He had participated in the Special Olympics in track, basketball, and bowling. He was a member of First United Methodist Church in Plattsmouth. Kent is survived by his sister: Kim Wolterman and husband Daniel of Lincoln, NE, niece: Lauren Wolterman, nephew: Brent Wolterman, numerous cousins, and many friends. He was preceded in death by his parents: Eldon and Eva "Pip" Meisinger and brother: Kerry Meisinger. A Funeral Service will be held at 10:30 A.M., Monday, January 19, 2015 at Roby Funeral Home with Pastor Michael McGregor officiating. Visitation will be held from 5:00 to 7:00 P.M., Sunday, January 18, 2015 at Roby Funeral Home in Plattsmouth. Pallbearers will be Daniel Wolterman, Brent Wolterman, Kirk Meisinger, and Mark Meisinger. Final Resting place is Oak Hill Cemetery in Plattsmouth. The family suggests memorials to ENCOR.

The family of Kent Douglas Meisinger created this Life Tributes page to make it easy to share your memories.

Send flowers to the Meisinger family.