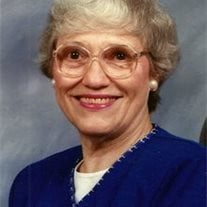 LAVERNE MAE PERRY May 30, 1926 – May 4, 2017 LaVerne Mae (Kellner) Perry age 90 of Plattsmouth, NE passed away peacefully on Thursday, May 4, 2017 at The Nebraska Masonic Home in Plattsmouth. She was born on May 30, 1926 to Arthur Raymond and Esther Minnie (Sellin) Kellner in Norfolk, NE. She was raised and schooled in Norfolk and graduated from Norfolk High School with the class of 1943. After graduating from high school, she attended Wayne State Teachers College for a year and then the University of Nebraska at Omaha for two years. Then LaVerne taught grade school at the country school in Madison, NE for two years. She met the love of her life Milo DeWitt Perry Jr. in high school and they were later married on August 29, 1948 at St. Paul's Lutheran Church in Norfolk, NE. They were married for 67 years. LaVerne worked as a principal at Oakdale Elementary School of District 66 in Omaha, NE until her daughter Susan was born. The family moved to Fremont, where son James was born. LaVerne enjoyed being an at home mom, wife, homemaker, and substitute school teacher. In 1964, the Perry's moved to Plattsmouth where they made their home and raised their children. Then in 1986 LaVerne and Milo moved to Belle Vista, AR where they lived for fifteen years, enjoying their retirement years. In 2007 they moved to Bellevue, NE and then in 2013 to the Nebraska Masonic Home in Plattsmouth. LaVerne loved her Lord, enjoyed her bridge clubs, and loved traveling, square dancing and camping. Her laughter was contagious. She was a member of First Presbyterian Church and Order of Eastern Star Home Chapter #189, both of Plattsmouth. LaVerne is survived by her daughter: Susan Nielsen and husband Steven "Steve" of Bellevue, NE; son: James "Jim" Perry and wife Sandra "Sandy" of Bennington, NE; five grandchildren: Scott Nielsen and wife Naomi of Omaha, NE; Sherry Arch and husband Rick of Papillion, NE; Spencer Nielsen and wife Melissa "Missy" of Cedar Hill, TX; Keith Perry and wife Stacy of Las Vegas, NV; Sara Christiansen and husband Anthony "Tony" of Bennington, NE; twelve great grandchildren: Alyssa DeLaCruz, Logan Arch, Kellner Arch, Amelia Nielsen, Aileena Nielsen, Mackenzie Perry, Sydney Perry, Kamdyn Perry, Emma Christiansen, Autumn Christiansen, Hunter Christiansen, and Easton Christiansen; sister: Arlene Hord of Elkhorn, NE; brother-in-law: Duane Riggert of Middleton, WI; numerous nieces, nephews, cousins, and many friends. She was preceded in death by her parents: Arthur and Esther Kellner, her husband Milo Perry and two of her three sisters: LaJean Magwire and Delilah Riggert. Visitations will be held from 1:00 to 9:00 P.M., with family greeting relatives and friends from 6:00 to 8:00 P.M., Monday, May 8, 2017 at Roby Funeral Home. The Funeral Service will be held at 10:30 A.M., Tuesday, May 9, 2017 at the First Presbyterian Church in Plattsmouth with Pastor Matthew Coplen officiating and Carol Wehrbein as organist. The Pallbearers will be Rick Arch, Scott Nielsen, Keith Perry, Tony Christiansen, Dr. Mike Hord, and Todd Magwire. LaVerne's final resting place will be next to her husband Milo at Oak Hill Cemetery in Plattsmouth. The family suggests memorials to the First Presbyterian Church of Plattsmouth.

The family of LaVerne Mae Perry created this Life Tributes page to make it easy to share your memories.

Send flowers to the Perry family.