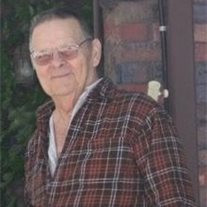 LARRY GARDNER 1937 - 2016 Larry Gardner age 79 of Plattsmouth, NE passed away on Sunday, April 3, 2016 at the Bellevue Medical Center in Bellevue, NE. He was born on March 30, 1937 to Sterling and Virginia (Cohn) Gardner in Nebraska City, NE. He was born and raised in Nebraska City until he was a freshman in high school, when he moved with his family to Plattsmouth, NE. He attended Plattsmouth High School and then served his country for two years in the US Army and four years in the Army Reserves. He met Ann Marilyn Winscot and they were later married on April 14, 1960 in Plattsmouth. Larry and Ann made their home and raised their children in Plattsmouth. Larry started Gardner Plumbing and Heating and then went on to form Larry Gardner Construction where he designed and built over 300 homes in Cass and Sarpy County. Also during that time he attended Bellevue College where he graduated Magna Cum Laude with degrees in history and psychology. Larry later received his real estate and brokerage license and founded Cass Reality. Larry had a master's license in HVAC, electrical, and plumbing. In 2006 he wrote Tips for Residential HVAC Installation, a book that is still used in trade schools and colleges today. Larry was a life-long learner and was seldom far from a book or other sources of inspiration. Larry is survived by his wife: Ann Gardner of Plattsmouth, NE; two daughters: Suzanne Landreth and husband Tim of Lincoln, NE; Cindy Gardner of New York, NY; two sons: Jim Gardner of Lincoln, NE; Steve Gardner of Plattsmouth, NE; eight grandchildren: Christian, Steven, Michael, Rochelle, Delainey, Margaret, David, and Sienna Landreth, three sisters: Jill Porter of Plattsmouth, NE; Kola Curttright of Plattsmouth, NE; Glenda Hervey and husband Del of Plattsmouth, NE; brother-in-law: Tom Winscot and wife Carole of Plattsmouth, NE; numerous nieces, nephews, cousins, and many friends. He was preceded in death by his parents: Sterling and Virginia Gardner and his father and mother-in-law: George and Frances Winscot. A Memorial Service will be held at 11:00 A.M., Friday, April 8, 2016 at Roby Funeral Home in Plattsmouth with Pastor Michael McGregor officiating. Final Resting Place will be at Pleasant Ridge Cemetery in Plattsmouth, NE. Memorials to the Family (A suitable charity will be chosen at a later date).

LARRY GARDNER 1937 - 2016 Larry Gardner age 79 of Plattsmouth, NE passed away on Sunday, April 3, 2016 at the Bellevue Medical Center in Bellevue, NE. He was born on March 30, 1937 to Sterling and Virginia (Cohn) Gardner in Nebraska City, NE.... View Obituary & Service Information

The family of Larry Gardner created this Life Tributes page to make it easy to share your memories.

Send flowers to the Gardner family.