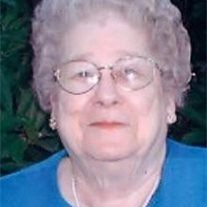 LAVINA ROSE RAMGE 1922 - 2015 Lavina Rose (Cordes) Ramge age 93 of Plattsmouth, NE passed away peacefully on Friday, July 17, 2015 at the Bellevue Medical Center in Bellevue, NE. She was born on May 26, 1922 to Fred Henry and Emma Mary (Ruemelin) Cordes in a little farm house outside of Murdock, NE. She spent her younger years playing with her older sister, Doris and brothers Orville and John on the farm that her parents rented. Lavina attended school in Murdock and graduated from Murdock High School with the class of 1939. After graduation, she went to work at a little country store called Knecht General Store in South Bend, NE and lived in one of the bedrooms above the store. She also, worked as a housekeeper for Sherman Cole in South Bend. She met Robert Layton Ramge on a blind date at the Kass Kounty King Korn Karnival and immediately they knew that they had found the one to spend their lives with. Lavina and Robert were married on February 11, 1945 in Plattsmouth and started their life together on a dairy farm. Even though being a dairy farmer's wife was a full time job, she found time to have four children, Roberta, Nancy, Mary, and Bruce. During these years, she also perfected her pie crust and her family kept her busy making pies for them. She was a talented seamstress and made many dresses for her girls and also kept busy making quilts and embroidered tea towels and pillow cases. She was an active member of Mynard Liberty United Methodist Church and the Ladies Guild, where she enjoyed the social aspects of this group. She had a quick wit and a wonderful sense of humor and loved her family. Lavina welcomed each new member of the family with her lovely smile and hugs and if she could get a new baby in a rocking chair, she was the happiest. After her husband Robert passed away in 1999, she lived with her daughter and husband in Blair, NE and spent the winters in Denver, CO with her daughter Nancy and her family until she moved to The Nebraska Masonic Home in Plattsmouth. She is survived by her three daughters: Roberta Hightree and husband Keith of Blair, NE, Nancy Mundorf and husband Charles of Blair, NE, Mary Williams and husband Dave of Owatonna, MN, son: Bruce Ramge and wife Mary Anne of Omaha, NE, eleven grandchildren, twenty six great grandchildren, three great great grandchildren, sister: Doris Marie Wilson of Lincoln, NE, numerous nieces, nephews, cousins, and many friends. She was preceded in death by her parents: Fred and Emma Cordes, husband: Robert Ramge, two brothers: Orville Cordes, John Cordes, two sisters-in-law: Esther Cordes, Ruth Ramge, two brothers-in-law: Maynard Ramge, Hank Wilson, one grandchild, and two great grandchildren. A Funeral Service will be held at 10:30 A.M., Wednesday, July 22, 2015 at Roby Funeral Home in Plattsmouth with Rev. Larry Vallery and Pastor Belinda Davidson officiating. Visitations will be held from 1:00 to 9:00 P.M., Tuesday, July 21, 2015 with the family greeting relatives and friends from 6:00 to 8:00 P.M. at Roby Funeral Home in Plattsmouth. The Pallbearers will be Alan Anderson, Ryan Anderson, Matthew Draper, Bryn Williams, Nick Ramge, and Philip Ramge. The Honorary Pallbearers will be Shelly Chapman, Jennifer Draper-Wolf, Lyndsey Hinsley, Jill Draper-Seeley, and Andrea Williams-Mallery. Final Resting Place will be at Oak Hill Cemetery in Plattsmouth, NE. Memorials to the Mynard Liberty United Methodist Church or The Nebraska Masonic Home.

The family of Lavina Rose Ramge created this Life Tributes page to make it easy to share your memories.

Send flowers to the Ramge family.