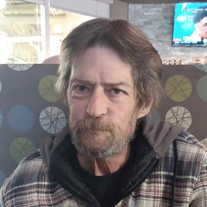 LESLIE IRVEN GRABER 1958 - 2020 Leslie Irven Graber, age 61 of Murray, NE passed away on Sunday, March 8, 2020 at his residence. He was born on August 18, 1958 to Raymond Willis and Betty Jean (Miller) Graber in Omaha, NE. He was raised and schooled in Omaha and he graduated from South High School with the class 1977. Leslie met Joyce Dee Lawson and they were later married on July 20, 1991 in Omaha. Leslie and Joyce made their home in Omaha, Beaver Lake, and for the last twenty-five years in Murray. He had worked in Omaha at a bottling company, Omaha Wilbert Vaults, and then as a self-employed carpet installer for over thirty-five years. He is survived by his wife: Joyce Graber of Murray, NE; his daughter: Laura Olsen of Bellevue, NE; two sons: Leslie "Les" J. Graber of Omaha, NE; William Cody Graber of Murray, NE; five grandchildren: Dylan Olsen, Devon Olsen, Jenna Olsen, Evelyn Graber, and Brayden Stednetz; two brothers: Ray Graber Jr. and wife Sherri of Waterloo, NE; Fred Graber of Savannah, GA; two sisters: Wendy Miller and husband Mike of IA; Patty Eden and husband Tom of IA; numerous nieces, nephews, and cousins, and many friends. Leslie is preceded in death by his parents: Ray and Betty Graber and his step-father: John Spartaro. A Celebration of Life will be held at a later date. Memorials to the Family (A suitable charity will be chosen at a later date). Services are entrusted to Roby Funeral Home, 346 Ave. A, Plattsmouth, NE 68048 (402) 296-3123 robyfuneralhome.com

The family of Leslie Irven Graber created this Life Tributes page to make it easy to share your memories.

Send flowers to the Graber family.