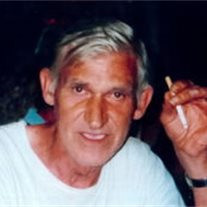 LOUIS LEONARD STUDY 1941 – 2014 Louis "Lou" Leonard Study Age 72 of Plattsmouth, NE passed away on Sunday, January 5, 2014 at the Golden Living Center in Plattsmouth, NE. Lou was born on January 19, 1941 to Ira "Bud" and Rosa Lee (Reeves) Study in Thurman, IA. He was raised and schooled in Thurman. He worked in the horse barns at Aksarben in Omaha for fourteen years, until Aksarben closed in 1985. Then, Lou worked as a production foreman at the Phillips Basket Company in Plattsmouth until the company closed. Later, he worked at the Plattsmouth Toll Bridge for many years until he retired. He is survived by his two sons, two daughters, numerous grandchildren, two sisters: Marilyn Keppler and Husband Ronald of Livingston, MT, Doris Bruns of Plattsmouth, NE, and numerous nieces, nephews, cousins, and friends. Lou was preceded in death by his parents: Ira "Bud" and Rosa as a production foreman Study, three sisters: Viola Lyons, Jeanelle Lawson, and Maria Long, and brother: Donald Study. A Funeral Service will be held at 11:00 A.M., Friday, January 10, 2014 at Roby Funeral Home in Plattsmouth, NE with Pastor Michael Lincoln officiating. Visitations will be from 1-6 P.M., Thursday, January 9, 2014 at Roby Funeral Home in Plattsmouth, NE. The Pallbearers are Chris Barton, Tony Pierce, Chuck Garrean, Steve Garrean, Steve Garrean Jr., and Davis Lawson. Interment will be at Thurman Cemetery in Thurman, IA. In lieu of flowers, memorials to the Plattsmouth Fire and Rescue Squads.

The family of Louis "Lou" Leonard Study created this Life Tributes page to make it easy to share your memories.