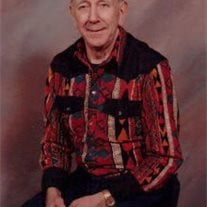 Lowell J. Vaughn 1929 – 2014 Lowell J. Vaughn age 84 of Plattsmouth, NE passed away on Thursday, May 8, 2014 at the Golden Living Center in Plattsmouth, NE. He was born on September 19, 1929 to Preston and Mabel (Minger) Vaughn in Arriba, CO. He was raised and schooled in Fullerton, NE. Lowell attended grade school at Liberty Knoll School and Fullerton High school. After high school, he worked at the Union Stockyards in Omaha, NE. Then, he enlisted in the U.S. Marines and served his country during the Korean Conflict. Lowell was the recipient of the Purple Heart and other service medals. After serving in the Marines, Lowell returned to Omaha and continued working at the Union Stock Yards. Later, he worked as a maintenance man for the Bellevue Public School System in Bellevue, NE. Lowell was well known for playing the button accordion in many polka and county western bands. Lowell was a member of Lepert Wolever V.F.W. Post #2543 of Plattsmouth, NE and Fraternal Order of Eagles Aerie #3912 of Bellevue, NE. He is survived by his life partner: Eldona Workman of Plattsmouth, NE, son: Russell Vaughn of Omaha, NE, daughter: Helayne Vaughn of Omaha, NE, Eldona's daughter: Michelle Salberg and husband Chris of Sterling, NE, sister: Carol Sowl of Greeley, CO, numerous, nieces, nephews, cousins, and many friends. He was preceded in death by his parents: Preston and Mabel Vaughn and two brothers: Robert Vaughn and Maurice Vaughn. A Funeral Service will be held at 2:00 P.M., Wednesday, May 14, 2014 at Roby Funeral Home in Plattsmouth, NE with Pastor Michael Lincoln officiating and Chris and K.T. Salberg as the vocalists. Visitations will be held from 1-9 P.M. with family greeting relatives and friends from 6-8 P.M., Tuesday, May 13, 2014 at Roby Funeral Home in Plattsmouth, NE. The Pallbearers will be Jese Salberg, Chris Salberg, John Wallace, Gary Vaughn, Maynard Dahl, and Larry Hanson. Internment will be at Oak Hill Cemetery in Plattsmouth, NE. Military Rites will be conducted by Lepert Wolever V.F.W. Post #2543 of Plattsmouth. The family suggests memorials to the Family.

The family of Lowell J. Vaughn created this Life Tributes page to make it easy to share your memories.

Send flowers to the Vaughn family.